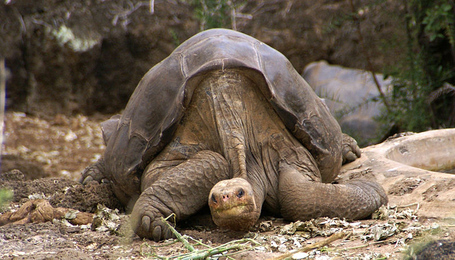 Good afternoon, cinnamon buns. It's sort of a gloomy Tuesday (at least here it is), but nothing brightens up your day like some Knicks links. Take the jump to be dazzled.

- Today's reptile is a sad one, as the Pinta Island Tortoise-- a subspecies of the Giant Tortoise-- is believed to have gone extinct over the weekend with the death of Lonesome George. George was just about 100 years old. RIP, big guy.

- I've been doing my best to keep up with Knicks workouts that go unannounced by the team. Two I've seen in the last couple of days: Aubrey Coleman (played at Houston and went undrafted in 2010) and good ol' James White.

- Donnie Walsh is back to work in Indiana. While I can't fathom his desire to keep working, I'm happy for Mr. Walsh.

- Alan Hahn's really making it sound like a settlement between the union and the league could be what gets this potentially nasty appeal process out of the way. As long as Steve Novak and Jeremy Lin remain Knicks and New York can pursue free agents normally, I don't care what else happens.

- Speaking of pursuing free agents, add Randy Foye to the list of people whose agents have mentioned the Knicks on their behalf. No way of knowing how feasible Foye would be, but I reckon he'd fit pretty splendidly.

- Carmelo Anthony's wax statue was unveiled today. He's also reportedly lost 12 pounds, which is nice, especially if he can keep 'em off all offseason long. I know he's got to add blubber for winter hibernation, but it wouldn't hurt his game to stay on the slimmer side.

- After going to Cali to meet with him, Mike Woodson reiterated that Jeremy Lin will be a Knick next year.

- Baron Davis insists that you don't get hit by any cars and don't hit people with your cars.

Them's the links! Remember to pour one out for Lonesome George today.