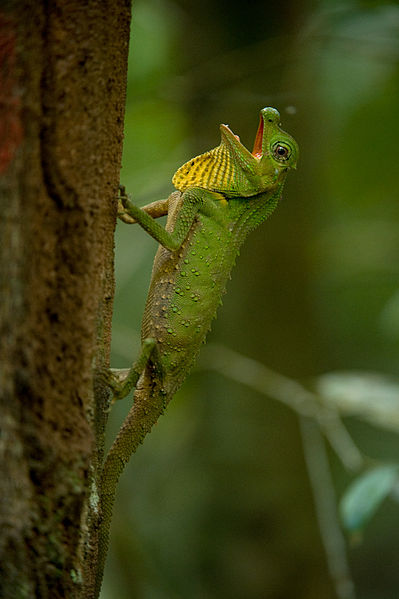 Hello, children. I have some links for you to click. I'll give you a second to wash the marinara sauce off your hands before I make you do clicking. Yeah, I knew you were eating pasta with your hands. I have my ways of knowing these things. Go ahead and wash 'em. I'll wait.

- Hump-nosed lizards have humps...on their noses, and they also appear to enjoy singing as they climb.

- Baron Davis wants to return to the Knicks next next year, which is nice of him.

- Tyson Chandler will be in the ESPN Magazine "Body Issue" this time around. No word on how much skin he's willing to show.

- Meanwhile, the Knicks' two "Body Issue" stars-- definitely Amar'e, maybe Tyson-- are expected to train with Hakeem Olajuwon this summer. That's great, but I'm honestly most pleased at the notion of Amar'e and Tyson working out together.

- Pablo Prigioni appears to have been told, as I'm sure many will be, that the Knicks have a ton of stuff to sort out before they can think about signing him.

- Qualifying offers have officially been extended to Jeremy Lin and Landry Fields, making them both restricted free agents, as expected.

- By the way, happy birthday, Landry!

- This thing where Basketball Prospectus compares the stats of draft prospects to former college players is always fun for me, and they were kind enough to go sixty-deep. I wouldn't fret about it too much one way or the other, but it's fun.

That's all for meow. We're but hours away from draft day!