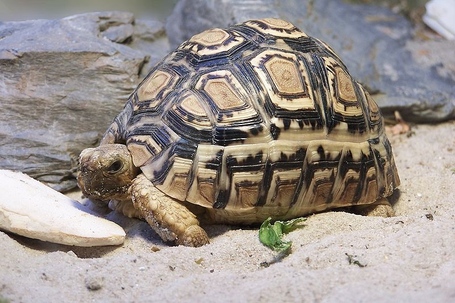 Good afternoon, equestrians. I hope all of you are well. Anybody watching this Djokovic-Tsonga match? It's a good'un, but perhaps it'll be done by the time I finish writing this. Hey, a challenge! Me versus Novak Djokovic and Jo-Wilfried Tsonga! Let's go! To the links!

- Leopard tortoises! They have leopard spots! That's why!

- He also talked a little bit about "reuniting" with Mike D'Antoni in London.

- Chef Max talks about feeding Amar'e Stoudemire! And some other Knicks! But who? Who gets invited to Amar'e's meal parties besides Fabolous?

- Dammit, Djokovic. Way too fast. I lost that race by a mile.

- Here's some stuff from the Jordan Theodore and Chris Smith workouts yesterday. Theodore sounds like an absurdly confident individual.

- It's the thirteenth anniversary of Larry Johnson's four-point play! I recommend watching at least a dozen replays of it.

- J.R. Smith, wonderful human being that he is, created himself in NBA 2k12 (nice teammate grade, bro!), then wondered publicly why he couldn't shoot step-backs. I CANNOT OVERSTATE HOW MUCH I WANT J.R. SMITH TO STAY WITH THE KNICKS.

- Knickerblogger's Iman Shumpert report card is up. Interestingly, the stats don't really back up the lockdown defense we've all seen. My explanation for that would be that Shump's defensive impact varied wildly from game to game. The fine stretches stand out, but there were a number of games that left us saying "well, Shump just wasn't himself on defense tonight". Once he's healthy, part of his task for next season will be spreading that defense evenly throughout the schedule.

- Late addition: Jonathan Abrams's Grantland piece on Stephen Jackson is just wonderful, and I actually found a tie to the Knicks: Mike Bibby's mom played a big role in getting Jackson his first NBA workout!

Them's the links! I bid each of you a lovely remainder of the day and shake my fist at Novak Djokovic for absolutely dominating Tsonga after our race began.