From the Fanposts, here's a li'l guest KTP from a long-time friend of P&T/Northwestern expert. -Seth

Hey, Posters and Toasters! You might not know me, but I've been reading this site for just about 16 years now, and for the past three, I've been writing the Northwestern sports blog for SB Nation, Sippin' on Purple, although my deep dark secret is that I'm a bigger Knicks fan than Northwestern fan. (Shh! Don't tell anybody! Seriously, I'll kill you.)

Anyway, I've been coaxed over here by Seth and Stingy to write up a Know the Prospect of Northwestern's John Shurna. Remember him? Y'alls invited him to a pre-draft workout. He's a 6-foot-9 three-four tweener that can shoot basketballs at basketball hoops a lot better than you. I will literally rip one of my non-vital organs out in excitement if he becomes a New York Knick. (If you're a betting man: gallbladder.) I'm not as good at Ross as this, but I'll try my darndest!

Here's what you need to know about the potential giggliest man in NBA history, John Shurna: 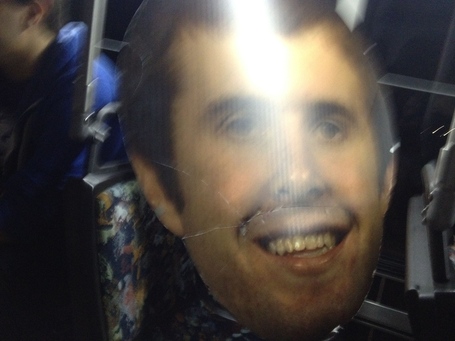 There's a lot of things you can do with a gigantic cardboard cut-out of John Shurna's head, like wave it around at games or build a shrine for your makeshift religion centered around John Shurna. One thing you CANNOT do is tape it to the ceiling above your friends bed so that when they wake up and look at the ceiling a gigantic smiling John Shurna is there looking at them. It's slightly too heavy and will end up falling on them in the middle of the night and wake them up.

The Medusa shot: Hideous, but deadly. John Shurna's shot will make you cringe. It looks nothing like a basketball shot should. I went ahead and screenshotted some pics from his championship performance at the College Three-Point Shootout: 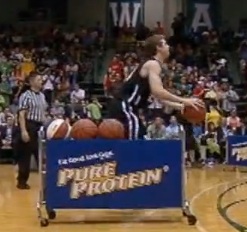 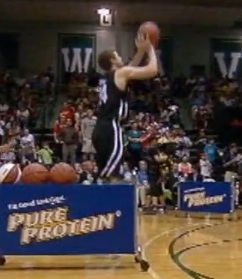 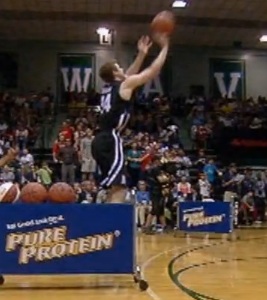 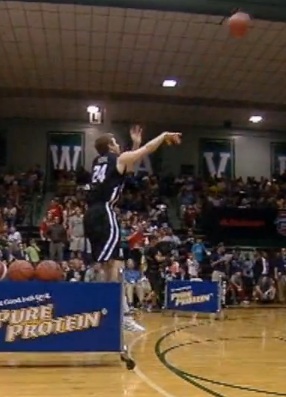 Ray Allen he ain't. I asked Big Ten bloggers to describe his jumper when he set the NU scoring record, here were my favorite responses:

If there was a Hollywood knockoff run entirely by albatrosses they would make a movie starring albatross Jean-Claude Van Damme in which a nefarious Eastern European terrorist played by a flock of ravens was set to blow up a basketball arena unless albatross JCVD managed to sink a three-pointer. Albatross JCVD would have a wing painfully broken by a terrorist flunky--probably a tern or something--during the dramatic final fight, forcing his shot to be dramatically lofted in a sort of broken lopsided hopeless albatross shove. John Shurna would be called in as a technical consultant. - Brian Cook, MGoBlog

John Shurna's jumper is like a man trying to throw a ravenous beaver off of his head. - BoilerTMill, Hammer and Rails

John Shurna's jumper is like an alien bursting forth from a prone man's chest cavity and then scurrying towards the basket. - Bring Your Champions, They're Our Meat

But it works. He shot 44 percent from deep this season, which doesn't sound great until you consider it's on seven shots a game with teams knowing he's a gunner. He's not a bad interior scorer either - he has a nifty game, a pretty quick first step, and can throw down if he gets a lane to the hoop - but I get the feeling he's not going to be expected to do much besides gun at the NBA level. If the Knicks need a replacement for Steve Novak, Shurna could be that guy, although obviously not as lights-out, he can straight up shoot. They both won the college three-point shootout and are both lanky white dudes from the midwest. It's a match made in heaven.

Natural-born MSGer: In two career games at Madison Square Garden against St. Francis (NY) and St. John's, Shurna had 26 and 28 points on combined 7-of-11 shooting from three. He likes those rims.

Giggliness: I mentioned this up above the jump, but Shurna giggles a lot. You'd expect somebody capable of setting a scoring record at any school, let alone a Division-I thingy, wouldn't be surprised a lot when they score. Shurna is the only player I've ever seen throw down a dunk in someone's face and then run back up court smiling instead of like, celebrating or flexing or doing anything basketball-y. And he does it every time! It's like he's just genuinely happy to have scored, and it's adorable. He's just so happy!

Obligatory highlight videos: Watch for evidence of how smiley he is.

He's not very good at shaving: Maybe this will improve after he goes pro.

But seriously, he gonna get drafted?: Alright, look: He can really shoot, and if I had to guess, I'd say he's not going to get picked but is right on the borderline. For sure, a lot of teams are taking looks at him right now, and I really think he's a good enough shooter to make it on the NBA level. The question is going to be his defense: Northwestern plays a 1-3-1 zone that makes it kind of difficult to see how good he is at man defense he'll likely be asked to play professionally, as it basically revolves around you running a lot and having your hands in passing lanes and playing help defense - which he isn't bad at, he set the school record in blocks, which, to be fair, isn't saying much. But all things told he's probably too slow to guard threes and every time he's ever been posted up, he's gotten absolutely bodied (a particularly awful performance against Baylor's Perry Jones III comes to mind). But I think he's worth a flyer.

Also, I just think it would be cool if the Knicks took someone who says hi to me when I see him at bars or on the way to class because it will make me feel cool and special. Is that so much to ask?

(Also, the only other time my college basketball expertise would have come into touch with the Knicks drafting moves, I would've told them not to draft Toney because of this game my freshman year, so, DON'T LISTEN TO ME AT YOUR OWN PERIL.)