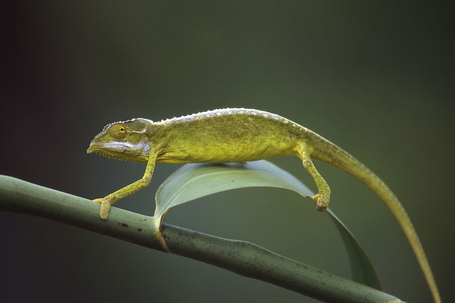 Evening, everyone! I've gotta be on the radio soon and we've got a game to watch not long thereafter, but I just want to sneak in some quick links for y'all before the night begins. Jump! Quickly!

- Seychelles tiger chameleons are the only extant species from the "resurrected" genus Archaius, and it only lives in the Seychelles Islands down near Madagascar!

- It's sounding more and more like Tyson Chandler is going to play a huge role in that Olympic thing they're doing this summer.

- I think chrive passed this one along: Jeremy Lin is Chinese, says China Taiwanese, says Taiwan (I'm a fool).. This debate is apparently still raging.

- Meanwhile, you know you're a big deal if Field & Stream reports on the fact that you caught a fish.

- Scott Machado apparently interviewed with the Knicks recently, so perhaps that's what they're doing when they're not working guys out? Or maybe by "interview" he just meant the workout or some other, off-court part of the workout or something, as opposed to, like, a call-back? I'm not sure.

- I have no recollection of Greg Bretten (before my time) but he's apparently an ex-Knicks assistant coach and he's leading a clinic in Tanzania this weekend.