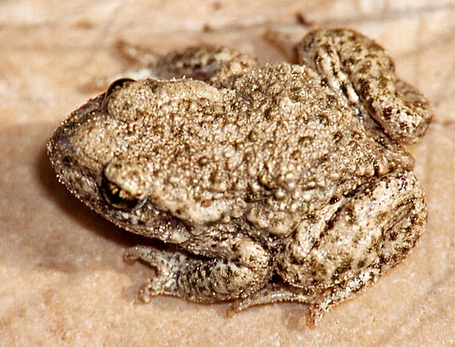 Good day, everybody. Hope you're all enjoying the weekend so far. I've been walking around outside, playing with dogs and ducks, and watching soccer in between, so it's been good for me. My browser thing has a few too many tabs open, so allow me to share some links with y'all so I can close them. Just a few, I promise.

- Midwife toads are called that because the male carries the eggs around on his back for a while. That's nice of him, but it looks really, really gross.

- Iman Shumpert gave Anthony Sulla-Heffinger of the Post a little update on his rehab. Get right, Shump.

- The Demon Coach keeps offering diplomatic, encouraging thoughts about Mike Woodson ditching his agent in order to assure a re-hiring with the Knicks. He's been really cool about this, that Demon Coach. I almost feel inclined to say his name. Almost.

- They're doing these NBA Social Media Awards things (the TBJ bros are involved!) and the Knicks are up for a few of the awards.

- Tommy Beer runs through some free agent point guards who MIGHT fall within the Knicks' price range. Obviously, a lot of that hinges on what happens this Wednesday.

- Tommy Dee hears that New York might be trying to exchange Landry Fields for a first-rounder, possibly with Golden State. If that's true, then good luck with that, Knicks (especially given how complicated I assume it would be to deal a restricted free agent). Yeah, nevermind.

- My friend Robert Silverman and a HEAT FAN.

That's all! Game Seven thread'll be up later. <3