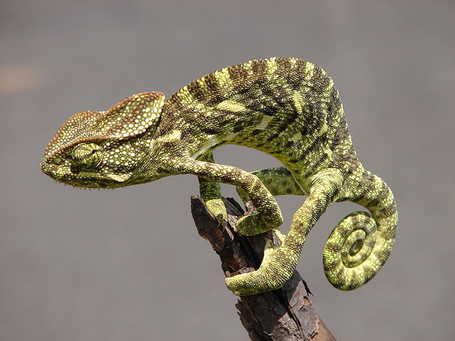 Good morning, friends. I try not to do two link dump posts in a row, but some things went up last night and this morning that I think will be of interest, so how about some morning reptiles? (Incidentally, I'm about ready to move on from reptiles/amphibians. I think 2012-2013 will be the SEASON OF THE BIRD).

- Indian chameleons change color just like everybody else, but they don't do it to camouflage. They just love to party (and communicate and thermoregulate).

- Jeremy Lin will probably sign his offer sheet today, at which point the Knicks will have three days to match. It'd be very chill of them to just get that matching done immediately, but that doesn't mean they will. The Knicks aren't the chillest.

- Carmelo Anthony and Tyson Chandler played pretty nicely last night, no? Tyson looked like Tyson and Melo played with that I'm-gonna-play-defense-this-time-and-the-only-way-you're-gonna-stop-me-from-getting-to-the-rim-on-the-other-end-is-to-foul-me enthusiasm that we saw later in the season. He's fun to watch like that.

- I shared this in a comment section last night, but I think we'll all agree that this line from Mike Woodson regarding Steve Novak is very encouraging:

"We've got to get him where he's comfortable working off screens," Woodson said. "In that position, you've got to be able to do that -- and he did it in college. In our system, we didn't run a lot of screen for him last year, and those are the things I think I can do. I can put him more in pick-and-rolls, where teams if they want to switch, they can switch and maybe we've got a mismatch with the point guard being guarded by a bigger guy that was guarding him.

Offseason assertions ≠ in-season execution, necessarily, but it's still good to hear that Woodson's well aware of something that bugged all of us throughout the season, and especially during the playoffs.

- James White had some nice stuff to say (about himself) yesterday, too. It's good to hear that White's out to prove his versatility, though I kinda would have loved if he said "Oh, yeah. I'm just really great at dunking. I can't do anything else. This is really fun, though! They're giving me all this money!".

- Bobby Gonzalez will be hanging out with the Knicks during Summer League. That's cool, I guess. Recall that Gonzo showed up at workouts back in May.

That's pretty much it for now. Have a lovely day and stay cool. Or stay hot, if that's what you're into. Stay at your preferred body temperature.