Game Four of Summer League is complete! The Knicks' Summer League squad inched closer to a victory, but not close enough to actually attain said victory. Notes and things after the jump...

- Since a ton of people here and on Twitter were asking me about this: Raymond Felton, who was in the building and apparently on MSG looks like he's in pretty good shape. I'm happy to have him back (and I was clearly mistaken in repeating that idea about the Knicks delaying their press conference on purpose). 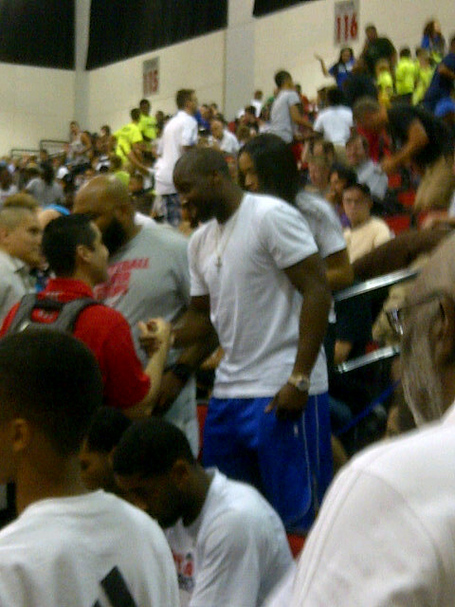 - Also in the house: Amar'e Stoudemire (in clam-diggers), Baron Davis (in a "RUN USA" shirt and a massive knee brace), and Landry Fields (in a tank top). This has been the Members Of The 2011-2012 Knicks And What They Were Wearing Today Report.

- Chris Copeland did the things that we're coming to expect from Chris Copeland. He set a lot of picks early on and mostly looked to pop out and hit long jumpers (which he did on several occasions). On the other end, he showed at least the suggestion of versatility, defending Ed Davis for a while and switching onto more guard-like bros like Kyle Weems later on. He got beat a few times, but looked at least somewhat comfortable in either setting. When mismatched on the other end with Weems, he looked to attack but got a little over-aggressive at times, committing at least one charge. In the final minute, he hit a jumper off the catch to cut into the Toronto lead, missed a couple bunnies that would've tied it (dude ought to go up stronger in general), then drilled a step-back three to cut the final deficit to two.

- If it's not clear from my vagueness, it's quite difficult to follow the game when, like, Felton and Amar'e and Landry and hundreds of other people of note are wandering around on the periphery. I don't have the attention span to sit on press row.

- Anyway, Sylven Landesberg (of interest because he's new and a shooting guard) looked decent as well. He handled the ball frequently and confidently and set up plays without ever really tossin' dimes. Hit a couple jumpers, too.

- Chris Smith really dribbles a lot. Shoots a lot, too. He's better than his brother at the former and worse at the latter. Also had a couple impressive finishes and, later on, some beautiful assists off the dribble.

- Terrance Withers (whose jersey says "WHITERS", incidentally) probably isn't getting a training camp invite, but he's scrappy as shit. I base most of that assessment off of one sequence in which he hit a contested three, fell into the sideline crowd, got up and clapped his hands while inadvertently shoulder-checking a ref, inexplicably dove headfirst into one of the Raptors running up the floor, then sprinted the other way after the missed shot and inexplicably dove over the baseline into the cameramen. I kinda think Terrance Withers just likes to hit people.

- I did not notice Justin Brownlee out there, but Scott Schroeder likes him, so I'm sure he's cool.

- Artsiom "Artsy" Parakhouski is often in the right place at the right time.

- Jerome Jordan's just not a goatee guy. I'm so sorry to say that, Jerome. I might be bitter because you can't play for the Knicks this season, but I think I'm right. I'm not mad, though, and I hope you're not mad at me for saying that. <3

That's all for now. New York's fifth and final game is tomorrow against the Cavaliers' squad.