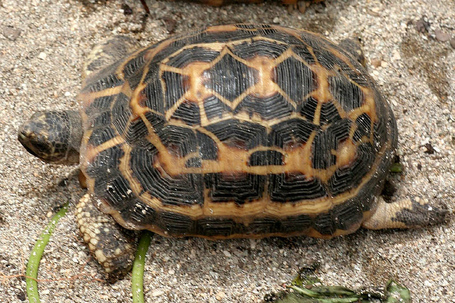 Good afternoon, children. I'm sure you're busy buttering gumballs right now, but once all your gumballs are buttered, how about a few links? Jump for 'em.

- Thankfully, it's "spider tortoise", and not "spider-tortoise". That hybrid would not be welcome on my planet.

- Over at Dear God Why Us Sports, a fine breakdown of NBA roster turnover in recent years. Obviously, the Knicks are stars of the show.

- Instagram is the best thing to happen to the USA Basketball team. Exhibit A. Exhibit B. Exhibit C.

- Meanwhile, Beckley Mason sees these games as further proof that Carmelo Anthony ought to be playing power forward.

- Here's a bit of what Ronnie Brewer said on WFAN yesterday. I listened to the whole thing, and he sounds like a really nice bro. I kinda love him already.

- Jared Zwerling speaks with Pablo Prigioni. Plenty of translation gems in there, though they've corrected a few since I first read the interview.

- This dude and his agent really want an invite to Knicks training camp. He might have a better shot if he grows eight to ten inches.

- The Brooklyn Borough President is corny as shit, but hey, I'm excited for Knicks-Nets, too!

- Jason Gay suggests that the Knicks walk across the Brooklyn Bridge prior to that game. That'd be an awesome tradition for both teams, though I worry about the Knicks' knees holding up during the walk. GET IT BECAUSE THEY HAVE SEVERAL OLD PLAYERS.

Them's the links! This weekend and the coming week are likely to be pretty quiet around here, but I'll try to get threads up for all the Olympic games and I'll keep y'all updated about whatever else transpires. <3