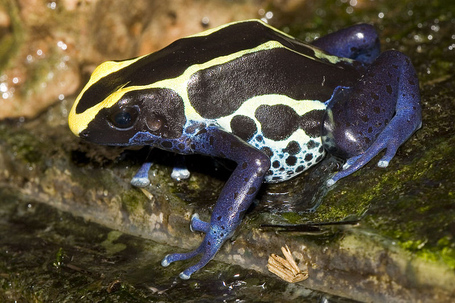 Good morning, life partners. I'll have an Olympic thread up later for the afternoon (EST) basketball games. For now, let me link you. Come caress my links. These links got me going crazy. Take the jump, take the jump.

- Dyeing dart frogs are poisonous frogs from the Guiana Shield that are, according to Wikipedia, called that because of the following:

Local tribes use D. tinctorius for decoration. Feathers are plucked from the back of young parrots and the frogs are rubbed on the parrots' exposed skin. When the feathers regrow, the toxin causes them to appear yellow or red rather than green. These altered feathers are highly prized by the indigenous tribes.

- It does, indeed, sound like the Knicks and Pistons will be playing in London on January 17th. That should be a fun week. Things like this just make me wish Renaldo Balkman was still around, though.

- Madison Square Garden was kinda on fire last night, but it sounds like no major damage was done to structure or human flesh.

- Chris Copeland told Jared Zwerling his off-court activities are "nothing special". Never believe people who say that. Copeland saying that all but confirms that he's a cross-dressing eel strangler.

- Carmelo Anthony says the darnedest things, such as "she's a Melo fan" of Michelle Obama.

- Tyson Chandler is violently confused about not being named to the first defensive team this past season. I'm worried that he's gonna flagrant foul some coaches this year.

- I had a dream last night in which I was having a really lively conversation with Mike D'Antoni on the sideline of a basketball game, only D'Antoni was over 7 feet tall and appeared to be holding his mustache on with one hand. Also, he'd occasionally dart away from the conversation to rush onto the court, snatch the ball from someone and throw down huge tomahawk dunks in the paint. It was AWESOME.

That's all for now! Have pleasant Tuesdays, sweet babies.