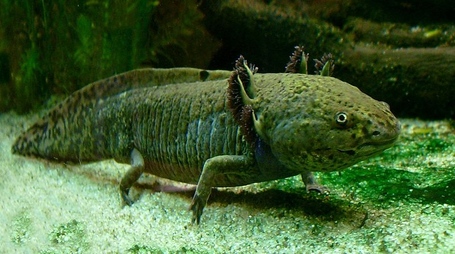 Good day, children. While attention centers on Dwight Howard and the Nets and stuff, there isn't much going on (at least not in public view) with the Knicks today. Even still, there's plenty to talk about and the looming possibility of something happening, so here are a few notes, a few links, and, most of all, a spot for you to comment throughout the afternoon.

- Axolotls are wonderful. They're like giant fish-salamander babies. The small, Leucinistic versions of 'em are sold as pets, and if I ever get quite rich, I will own very many of them.

- The Knicks met with Marcus Camby yesterday. The meeting was "very positive". I picture a lot of smiling and thumbs up and multiple utterances of the phrases "great job!", "great!" and "that's great!". Marc Berman says Camby is expected to make a decision by Wednesday, at which point the Knicks will determine whether a mini-MLE signing or a sign-and-trade is the way to get him (you know, if he picks New York).

- I think I said this yesterday, but note that the Knicks' official Summer League roster is probably waiting on Camby's decision and the Jason Kidd signing to go through. As it stands, Josh Harrellson, Jerome Jordan, Toney Douglas, Chris Smith, and Chris Copeland are signed up, but any of those first three could be included in a trade.

- Everything, really, is waiting on the Camby/Kidd stuff. It was gonna rain today, but the rain is waiting to see where Marcus Camby goes.

- Meanwhile, Howard Megdal makes a pretty good case for Camby's fit in New York. Recall that the Knicks were a pretty mediocre rebounding team last season, and also recall how things looked defensively when Tyson Chandler was off the floor.

- Berman hears that Randy Foye probably isn't going to be a Knick. New York still needs another shooting guard (or A shooting guard, if J.R. Smith doesn't return for some reason), and they'll probably have to pay him the veteran's minimum.

- Georgios Printezis is reportedly about to sign a three-year deal to stay with Olympiacos. It didn't sound like there was much interest (in either direction) in Printezis joining the Knicks, but that'll cement it, at least until 2015 (when the Big Fish will be 30).

That's pretty much what's going on right now. I'm still hoping that Summer League roster will materialize in the near future, but I'm not counting on it. <3