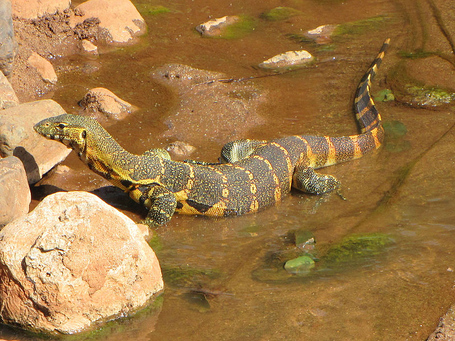 Good morning, friends. I hope your weekends have been cheerful and insect-free so far (unless you are a friend of the insects). I don't have many links for you this morning, but I do have some. I wouldn't come back from a hunting trip in the Link Forest empty-handed.

- According to Wikipedia, small breeding populations of Nile monitors have been settled in parts of Florida for over twenty years. Why people would intentionally add MORE athletic, toothy beasts to the Florida environment is beyond me, but...cool. Apparently people keep these as pets.

- Our old friend Phil Naessens was kind enough to have me back on his show to talk about the Knicks' offseason and the Olympics and stuff (this was before the Argentina game yesterday). I think I got a little worked up about Jeremy Lin.

- I don't remember if we've already learned this, but it's clear now that Mike Woodson arranged for Amar'e Stoudemire to spend time working with Hakeem Olajuwon (his old teammate). Also, Amar'e's apparently headed to China later this summer.

- Alan Hahn suspects that this is Carmelo Anthony's last trip to the Olympics, though medaling for a historic fourth time might be enticing (and any planned age limits wouldn't be in effect yet to stop him).

- Tony Williams of the Star-Ledger runs us through some of the remaining free agent big men. I'd totally forgotten about Mehmet Okur's existence/availability.

- Update: A cool thing about the first time Tyson Chandler and Kevin Love met, back when Love was just a "little fat kid".

That's all for now! Be well, children.