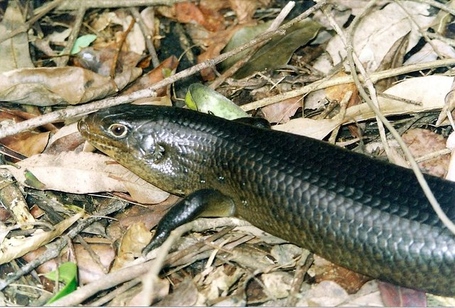 Good Monday, dogbugs. The Olympics have ended, which means we've now entered that most desolate stretch of the offseason. At least we're not in a lockout, though. There will be basketball. Training camp is just weeks away. In the meantime, we've got links.

- Land mullets are Australian skinks that earned their name because they stink like some fishes. I hope that name doesn't make them self conscious.

- As a few of y'all noted, Carmelo Anthony and his teammates and his rapper friends enjoyed themselves in London last night. They did drinking and danced dances. Happy for 'em. Meanwhile, does anybody know what I mean when I say almost every picture of Nas looks like a picture of a picture of Nas?

- Tyson Chandler is headed to Africa today for a UNICEF event, so Jared Zwerling wonders if he'll ever actually make it to Houston to work with Amar'e Stoudemire and Hakeem Olajuwon. I guess the UNICEF stuff is more important but wahhhh. Update: Indeed, Chandler won't make it to Houston.

- This breakdown of the Knicks' finances, passed along by stingy d, is quite thorough indeed. It's worth a bookmark, at least until New York's next massive roster change.

- Something about some Patrick Ewing sneakers?

- From the Twitters: Chris Smith got his college diploma (congratulations!) and Pablo Prigioni would rather have TEN MORE KIDNEY COLICS than go through the pain and sadness of yesterday's loss to Russia.

Mmhmm. Yes. That's all for right now. Have lovely afternoons.