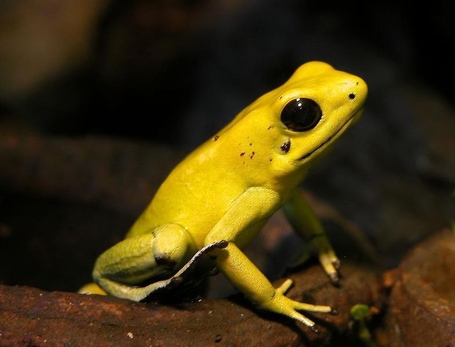 Heeeeeeey guys. How's work/school/oh wait it's not the school year yet? If you'd like to take a break and pay the Knicks some attention (they are most dormant during August, but still benefit from 30-90 minutes of caring and playtime each day), I've saved up some links from yesterday and this morning for you to peruse.

- I highly recommend reading the Wikipedia page for the golden poison frog. It's considered the most poisonous frog on the planet, which means you get sentences like this:

The golden poison frog's skin is densely coated in alkaloid poison, one of a number of poisons common to dart frogs (batrachotoxins), which prevents nerves from transmitting impulses, leaving the muscles in an inactive state of contraction. This can lead to heart failure or fibrillation.

Chickens and dogs have died from contact with a paper towel on which a frog had walked.

And there's plenty more. Their social and parenting behavior is interesting as well. Good job, you terrifying-ass frogs.

- The Knicks were uhhhhhh not so good with Amar'e Stoudemire on the floor last season.

- The solution: Post moves (and a happy, healthy summer with no lockout)! Here's Amar'e reflecting on the time he spent with Hakeem Olajuwon. The way Amar'e talks about himself is kind of the best.

- J.R. Smith apparently showed up at Dyckman and did some cool shit on Monday night.

- Baron Davis is convinced that he can make a comeback THIS season, which would be really impressive and great for Baron. It'd almost definitely mean he leaves New York, though, and stops hanging out with our team and wearing our team's shirts and stuff.