Share All sharing options for: Mike Woodson was a Bleacher Creature last night.

Mike Woodson's been popping up just about everywhere this summer. Back in the day, we saw him travel out to Los Angeles to meet with some Knicks and Knick free agents (guh). Later, he showed up in Las Vegas for Summer League, in London for some Olympic games, and outside your window right now, regarding you with unblinking consternation. Do NOT look out there.

Last night, Woody made his way to Yankee Stadium to take in New York's win over the Texas Rangers (I assume he "takes in" games by standing and glaring at them with folded arms). Woodson, who claims to have been a Yankee fan for 32 years (he's from Indiana, where there have never been many local alternatives), gave an interview during the rain delay, sat with assistant coach Darrell Walker among the "Bleacher Creatures" in right field, fraternized courteously with even the grouchiest of fans (was that one of us?), and, as Yankees PR captured in a photo, assisted Bald Vinny and friends in the traditional "roll call" once the game got going: 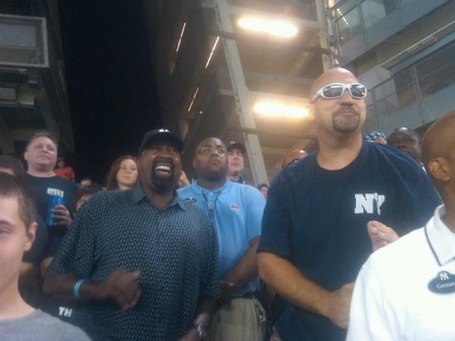 Remember that smile a few months from now when Woody is glowering at J.R. Smith for shooting a step-back, double-pump free throw. That same guy wore a golf shirt and a hat and gleefully chanted and clapped for, like, Raul Ibanez. He's not that scary.