News broke yesterday that the Rockets had waived the non-guaranteed contract of Josh Harrellson to make room for Carlos Delfino. Putting aside the fact that that's the single most hideous roster decision of all time, I reacted the same way I did when Houston cut Jerome Jordan a few weeks ago: I wanted Jorts back. I think Harrellson's a fine young player, and saw enough rebounding/defending/offense/reckless fouling to believe that he has the potential to enjoy a long, effective NBA career. Also, he's Jorts, and I love him.

Alas, as was the case with Jerome, the Knicks are forbidden from reacquiring Jorts for quite a while. From the Post:

Because the Knicks traded Harrellson away, however, he can’t come back to them. Under the new collective bargaining agreement, teams that trade away players cannot re-sign them for a year after the trade – ending the previous common practice of a team trading away a player, only to see that player get bought out of his contract or waived and re-sign with the team that traded him 30 days after the deal was done.

So, see you next summer, Jorts.

Jorts or no Jorts, I'm of the opinion that the Knicks still need a third bench big man, and, inspired by this inquiry from StarksMiddleFinger, I did a little research and found a reasonable alternative. 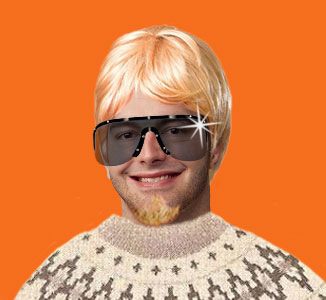 This photo, rendered by P&T citizen normanhathaway, is of Jörvald Harrüllsson, known affectionately as "Jörts" (pronounced yorts). He's a 6'10", 23 year-old forward/center hailing from one of the most barren regions of the Arctic Circle-- perhaps north of Greenland. Not much is known of Harrüllsson's game, but he's believed to be a scrappy rebounder and defender with a surprisingly accurate three-point stroke. After transferring from junior college to the University of Chinooky, Harrüllsson found himself at odds with head coach Johannes Calipërsson, but worked hard between his jünior and senior seasons to win a spot in the starting lineup. Coaches have described his game as "permafrost strong". In his free time, Jörvald reportedly enjoys hunting reindeer, fishing for narwhals with his bare hands, and flatulence ("järts").

As Harrüllsson is a new player who went undrafted and who has never played for the Knicks or anywhere in the NBA before, he is eligible (and willing to accept) a rookie's minimum salary.

There are plenty of options out there, and I understand that Jörts is a totally unfamiliar player with zero professional experience, but I do hope the Knicks consider this promising newcomer.