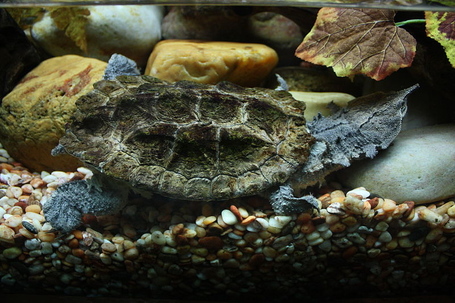 Good evening, cookies! I've got my weekly radio appearance with the WCWP bros at 6:30, but before I do that, I'd love to close all these tabs I've got open. That means links. Quite a few links.

- The mata mata is a side-necked turtle (meaning its head turns sideways into its shell, like a pocket knife, instead of drawing straight backwards) from South America. It's got a crazy, thorny-looking head and carapace that make it look like a bunch of leaves and rocks at the bottom of a stream. These characteristics help it gobble up whole unsuspecting fish with ease. People who like to have somewhat scary pets keep them as pets.

- On that note, Kelly Dwyer and Zach Lowe both wrote wonderful posts about the past and hopeful future of Amar'e and his post game.

- J.R. Smith is expected back at Dyckman tonight, and Jared Zwerling suggests that another big name or two will make an appearance as well. Melo, perhaps?

- "Are you kidding me? I have about nine vehicles."- Amar'e Stoudemire. ABOUT. He has to estimate.

- Speaking of vehicles (I am just nailing these segues today!), noted automobile collector Pablo Prigioni had some fun in this ol' whip yesterday. Is "whip" still a thing people say?

- Amar'e and Baron Davis, chillin' with Mindy Kaling after wrapping up their guest appearance on her new show. Baron participated in a round of McKayla Maroney facin', too.

- Here's Kurt Thomas talking about Raymond Felton's return to New York (and his own, of course).

- And here's Tyson Chandler reflecting on the London Games. The notion of Mike Krzyzewski willingly playing a Marvin Gaye recording doesn't really compute for me.

That's all for now, children. Enjoy your evenings!