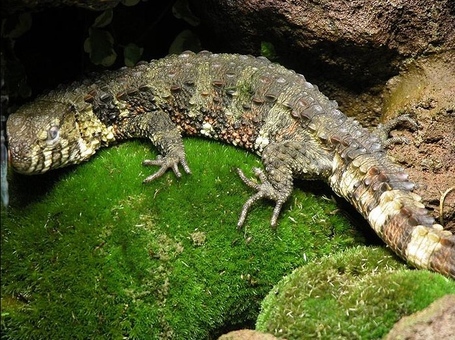 Good morning, friends. I'd like to get a thread up in time for the Argentina-Tunisia game, but first I'd like to pass along all these links I've been saving up over the last day or two. Sharing many links means closing many tabs, which is really the ultimate feeling of release. I can't think of anything more satisfying. Wait...no. Nope. Nothing. To the links!

- That crocodile lizard really does look like an iguana with a croc paint job.

- Al Iannazzone says Chris Smith's deal with the Knicks is for two years, with much of those two years non-guaranteed. As was mentioned yesterday, the signing doesn't necessarily mean that Chris will join J.R. on the Knicks. He could very well end up in Erie for a while. Now that he's around, though, I hope he picks up his play significantly from Summer League, makes the team, and engages the zaniest bro-bro basketball tandem of all time. I just want him to deserve it, ya know?

- For what it's worth, Smith seems to have a clear understanding of his brother's influence and a sense of humor about the scores of people hatin' on him on Twitter.

- Jared Zwerling's two-part interview with Ronnie Brewer is pleasant and worth a read.

- Howard Megdal has seen Carmelo Anthony looking his best during the Olympics, and so have I.

- These are the sneakers Amar'e Stoudemire will wear, I guess, if you're interested in such things.

- Baron Davis (not a Knick) has been doing a British accent and making these Olympic video things. I've seen a few of y'all link them. Here are all of them, I think.

Have lovely Thursdays, all! Olympic thread up soon.