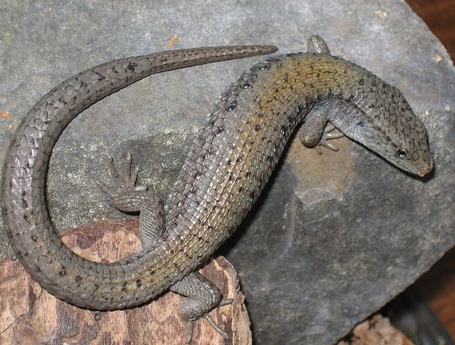 Good day, children. My apologies for the relative quiet around P&T of late. The Knicks aren't up to much and I'm on vacation with m'family for the week. So, yeah, the posting and toasting may be limited for a little while. Not to worry, though. Training camp is but weeks away, and right at this moment, we've got links.

- Alligator lizards apparently live all up and down the Pacific coast of the U.S. The Northern variety can be found up around Washington, Oregon, and Northern California. I've never seen one while visiting those regions and I don't think I'd like to.

- Carmelo Anthony and Amar'e Stoudemire are mentioned as former peers of Jonathan Hargett in this profile of the imprisoned former high school star.

- Keith Schlosser spoke to the agent of Tony Taylor Jr., who's apparently drawing interest (and another workout) from the Knicks.

- This is a few days old, but here's Tyson Chandler's account of his trip to Tanzania for UNICEF.

- Tom Ziller notes that New York's hiring of Mike Woodson is part of a trend of teams promoting their interim head coaches.

- Amar'e Stoudemire is at the Barnes and Noble on 54th and 3rd signing copies of his new kid's book today. Like, right now.

- And when you do stuff like that, you get interviewed by babies.

That's really it for now, buddies. I hope your weeks have all started pleasantly and with minimal toothache. <3