"Allow me to reintroduce myself, my name is NOV."

These are tense times. The atmosphere among New York basketball fans is growing increasingly militant. Nets fans have been making periodic raids on this site, starting arguments in the comments section, and I'm sure Knicks fans have been responding in kind. The fans can't wait for the season to start, can't wait to see which club will rule New York.

There is, however, a proxy battle playing out even as we speak. Two men, one from the Nets and one from the Knicks, have emerged as contenders for the title "King of New York." Who will take the crown? We'll find out today.

In this corner we have Jay-Z:

A.K.A. J-Hova, Shawn Carter, Jigga. The man who made the Yankee hat more famous than a Yankee can. 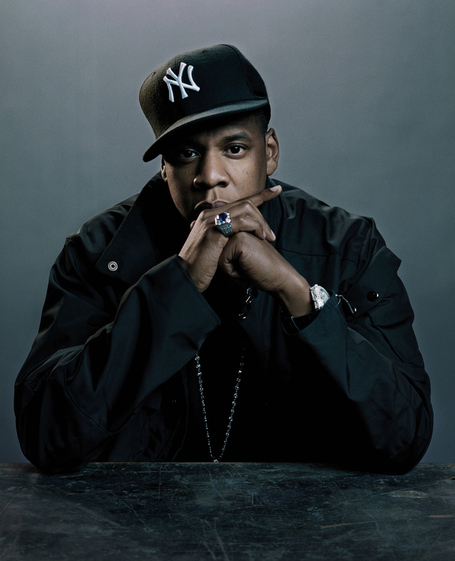 And in this corner we have Steve Novak:

A.K.A. White Nova, Novakaine, the Money Badger. The man who made the Discount Double-Check more famous than Aaron Rogers can. 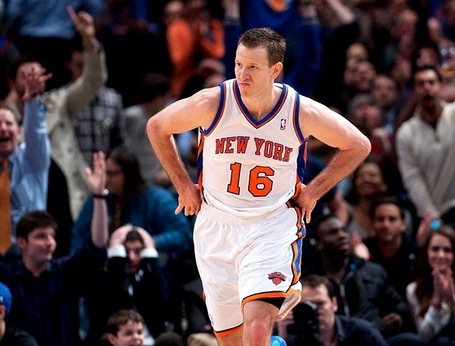 Who wins this clash of the titans? Let's break it down:

Novak: Shockingly, the Pride of Wisconsin was actually born in Libertyville, Illinois. I hereby petition the governor of Illinois to change their state motto from "Land of Lincoln" to "Land of Novak." Sure, Honest Abe was tall, but could he shoot the J?

2. Before they were stars:

Jay-Z: Did you know he used to sell drugs? I don't know how you would have found out...he only mentions it in every song he's ever made. Seriously, Hov, we get it already.

Novak: Played basketball for Brown Deer High School in Brown Deer, Wisconsin. That's perfect! If I tried to imagine the town that had given the world Steve Novak, I don't think I could have come up with a better name than Brown Deer.

Advantage: Novak. Say NO to drugs...say YES to deer!

Jay-Z: Started Roc-a-fella Records with Damon Dash, who would late go on to make a fortune selling Roca Pads.

Novak: Started on the Marquette team that made the 2003 Final Four. Later parted ways with teammate Dwayne Wade after the draft. Who knows what the hell happened to that guy...he's probably grubbing quarters at the bus station by now.

Jay-Z: I'm sure just about all of you will debate me on this, but I'm partial to the Black Album.

Advantage: Novak. I just listened to the Black Album. I'd say that nine of the 14 tracks are undeniably great, which works out to 64.3% Steve Novak's True Shooting Percentage last year? .684. It's called Math, people.

Jay-Z: The "Dirt off Your Shoulder", once copied by President Obama.

Jay-Z: Beyonce. Not bad, but I'm more of an Alicia Keys guy.

Novak: According to NBA.com, he's married to Christine Novak, his classmate at Marquette. I didn't google her, and I didn't need to, cuz we all know the Wisconsin honeys are top-shelf.

Jay-Z: Jigga loves bricks. He raps about them all the time:

"From bricks to Billboards, grams to Grammy's."

"Could make 40 off a brick but one rhyme could beat that."

Somebody needs to tell this guy that bricks are a bad thing - maybe not in the drug game, but definitely in the basketball game.

Novak: Never met a brick in his life.

There you have it - Novak wins this showdown, 5-2. Even if Marcus Camby goes down this season and Kanye avoids a case of Kardashian Khlmydia (the very worst kind of khlymdia), it still wouldn't be enough to stop the reign of Novak.

Now, does this mean that the Knicks are a better team than the Nets? I'll leave that up to you.