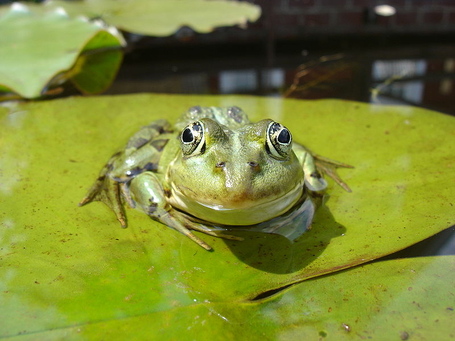 Good evening, friends! This is going to be quick because I'm due on the radio in a few minutes and have a terrible internet connection, but I do have a few late links for y'all. Just a few. Jump for 'em.

- Frog legs (which I've had once. They were okay.) come from the "edible frog". Kinda sucks for them to have their most defining characteristic be their tastiness, no? It's actually a hybrid of two other common species, I guess to maximize said tastiness.

- Josh Harrellson on the Heat would hurt me so deeply. Don't you do it, Jorts. A workout is one thing, but we can't possibly stand you joining Miami.

- The Knicks uhhhh haven't had much playoff success recently.

- Alex Raskin wonders if the Knicks are ditching the black on their uniforms to separate themselves from the monochromatic Nets. Perhaps.

- According to projections (and, really, if you just look at it), the beginning of the Knicks' regular season schedule is by far the toughest part. Keep this in mind when everybody's freaking out in mid-November.

- Jonah Ballow talks to Steve Novak, who's been working out with Raymond Felton recently.

- This is awesome: Jack Moore of BuzzFeed caught Fox Nation calling Carmelo Anthony a "noted anti-police activist", I guess because of all that Stop Snitchin' stuff from back in the day. Just wonderful.