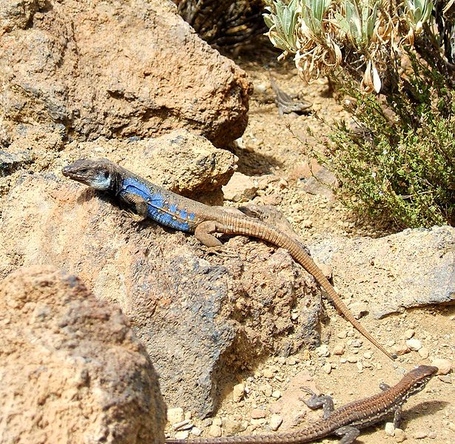 Good day, babies. Tomorrow, I'll put together a poll so we can pick our three-on-three team for real. In the meantime, how about some links?

- Tenerife lizards live in the Canary Islands (including, but not limited to, the island of Tenerife). According to Wikipedia, they're very friendly and will come annoy tourists and sit on them and stuff.

- Today's big, wonderful thing that basketball people are discovering is VORPed. Take a look. I'll probably do a post on that data alone, at some point, but you're encouraged to do some 'splorin' of your own in the meantime.

- Pablo Prigioni shows off and discusses some of his wheeled belongings.

- The Knicks blog at the Star-Ledger wants to know what Glen Grunwald's best offseason move was. At the very least, the list of candidates provides a nice rundown of a very busy offseason.

- The fitness coach of the Premier League's Reading FC derives a lot of his regimen from the Knicks', presumably via Dave Hancock, New York's director of training and conditioning.

- Via Alexander Chernykh, a Stereogum music reviewer compares The Walkmen to Tyson Chandler.

- This is oddly entrancing. I imagine that's even more the case if you're not a fan of Carmelo Anthony's.

- Speaking of Melo, Ian Levy is skeptical that his Olympic success will translate to an improved NBA season. I just hope he keeps hitting open shots. Less worried about his style of play.

- Meanwhile, Melo was apparently part of the opening ceremonies of the US Open last night. Did anybody catch that?

Yeap. Them's the links. I hope you enjoyed at least two of them. May you all have safe, fruitful days.