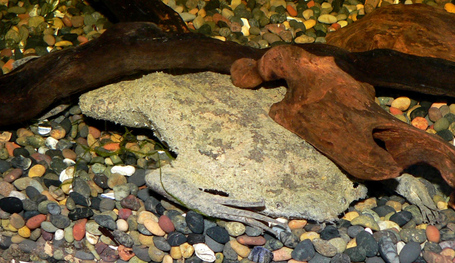 Good day, marvels! Are you busy? What are you up to over there? Is that a giant keg of pickle juice? It is? And you're-- are you just dropping stuff into it? Did you just drop a pencil in there? Wow. So you're just pickling all the stuff on your desk, or what? You are? Okay. Well...I have a few links I'd like to share. I'm just gonna leave them here and you can come take a look when you're done. Wash your hands first, please.

- Cool things about Surinam toads: 1. They look like leaves or flat rocks or something. 2. They go by the name Pipa pipa. 3. Their "remarkable reproductive habits" are, indeed, remarkable. Disgusting, too.

- Here's the schedule for Tyson & Melo & Pablo in the quarterfinals tomorrow. If the U.S. and Argentina both win their first games, they'll meet in the next round.

- Here's a follow-up on the reported mutual interest between the Knicks and Donté Greene. I suppose he could just be pulling a Grant Hill.

- Kenny Atkinson, now headed to the Hawks, was well-regarded in the New York locker room and is considered a prime head coaching candidate for the near future. I've now read this in several places. Good for the Hawks, I suppose.

- A P&T friend/creator of several Jeremy Lin photoshops that y'all enjoyed back in February named Kyle just designed this cool, simple Patrick Ewing t-shirt. Someone ought to get Patrick one for his 50th birthday.

- I've had a bit of trouble following Tyson Chandler's hand injury (recall that he whacked his hand on the rim in one of the previous U.S. games, and has seen spottier minutes since), but it's pretty clear now. In case you were also confused: Chandler dislocated his left middle finger before U.S.A camp even started, then aggravated the injury with that rim-smash. He'll be okay.

- Carmelo Anthony will also be okay, but this didn't look pleasant yesterday.

- As some of y'all pointed out, Amar'e Stoudemire's first session with Hakeem Olajuwon yesterday was slightly more strenuous than, say, how I spent my Monday.

- Chris Smith is very excited to be a 2K person. I don't really know the backstory behind that picture (does 2K send players their cyber-facsimiles in advance. If so, did they really already make one for Chris Smith?), but there it is.

Those are the links! You may now resume pickling your belongings.