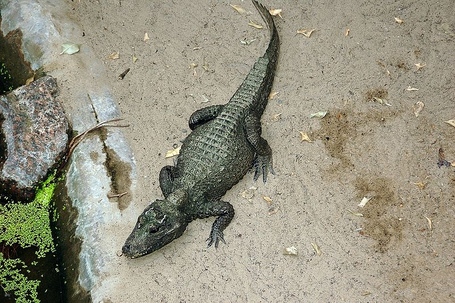 Good day, beans. It's a quiet day in Knicks world, with no men's Olympic games until tomorrow and no news thus far today. I've got some links, though. Always links.

- Dwarf crocodiles (which might actually be a couple different species) are the smallest crocodiles in the world. They're still about the size of a person.

- All three OlymKnicks will be in action tomorrow at 4:00 EST. Tyson Chandler, Carmelo Anthony, and the U.S. play Pablo Prigioni and Argentina with a trip to the Gold Medal Game on the line.

- As a few of you have linked, there's now some video of Amar'e Stoudemire training with Hakeem Olajuwon and JaVale McGee. Hakeem's still so goddamn smooth.

- Alan Hahn reminds us that Chandler will also be working with Olajuwon later this summer. As I've mentioned before, I hope he and Amar'e overlap at some point. Getting a little extra tandem work in would be really splendid.

- The Madison Square Garden folks granted some writers a glimpse of the second round of renovations. The upper bowl seats are, they say, slightly closer now. Lots o' new suites, too.

- Because of those renovations, the Garden probably won't be hosting any exhibition games this year. Still waiting on the full preseason schedule.

- La La Vazquez, commenting on the spectacle of her husband getting slapped in his husband parts:

"I was like ‘Damn, that looks like it hurts," reality star La La Vasquez told the Daily News. "(Melo) shook it right off, but it was just an unnecessary foul. The guy was mad about something else. In the States you wouldn’t be able to get away with something like that."

- Unrelated, but Melo's hamstring has been bothering him. Nothing major.

- I'll leave you with this photo of J.R. Smith at the dentist. J.R.'s dentist has sort of an Ashley Schaeffer thing going on, and I'm not so sure about his methods. Hitting J.R. with the gas then skewering his gingiva to make gum kebabs doesn't seem like great dentistry.

- Jim Cavan lends a little credence to my mostly unsubstantiated hope that a solid Olympic run and a gold medal will boost Melo's (and Chandler's) performance for the Knicks this season.

That's all for now! Have peaceful afternoons, friends.