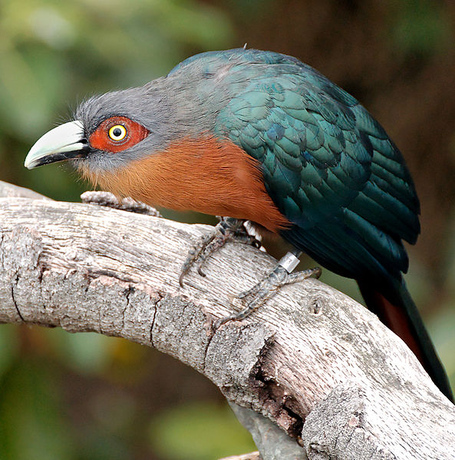 Good day, utility infielders. How were your weekends? Did you eat any good meals? Did your various football teams win their footgames?

Want to see some links? Of course you do.

- Birds! The chestnut-breasted malkoha is a bird. It lives in Southeast Asia and it is quite a handsome bird. The bird in my home is currently cheeping rather excitedly, I think because I'm typing about birds.

- First thing: The Knicks have added a game to their preseason schedule. On October 22nd, they'll play the Sixers at Syracuse's Carrier Dome.

- Question from Ziller (being asked of all the SB Nation NBA communities for use in a post later): Who's our most hated Knick ever? I think my answer would be Tracy McGrady, but I doubt that'd be the most popular choice.

- Ziller also set about listing the league's worst owners today. James Dolan's in there as the totem of "Complete Self-Destructing Ineptitude". That's our Jimmy!

- Iman Shumpert went to a Liberty game and, of course, got to hang out with the mascot. Knowing Shump, they probably made out.

- Via Megan Ann Wilson, here's Tyson Chandler wearing his hat and towering over the A$AP Mob.

- Bobert Silverman from Knickerblogger sent me a link to this eBay listing for a game-used Warren Carter Knicks jersey. I'm considering placing a bid well above the listed price, because $135 is waaaaay too low for such a gem.

- The Knicks are going to win the championship this season! Thanks for letting us know, J.R. Smith!

- Remember that today is day one of Knicks pre-training camp. Hopefully the players'll all be tweeting about it later, because there's no media availability.

- Over the weekend, Marcus Camby went into even more detail about his decision to decline a job with the Heat in favor of a return to the Knicks. Thanks be to Allan Houston.

- I know he's not a Knick anymore, but here's Jared Jeffries with Brad Miller and a very dead alligator.