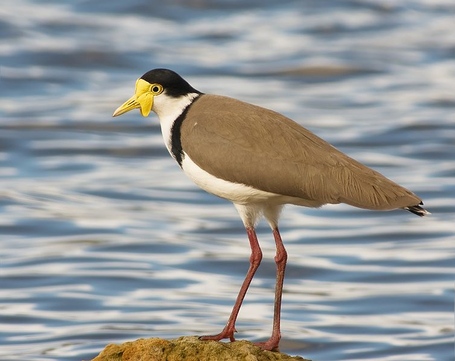 Good morning, children. Welcome to the week before the week before Knicks training camp. We're almost there. We'll make it. I went foraging for links over the weekend and returned with a decent haul. Please ration these and don't use them all at once.

- Masked lapwings look like regular ol' plovers that you'd see walking around near some water, except with faces dipped in yellow cement or something. They live in Australia and behave some pretty cool behaviors.

- BigTom already shared these, but here are some photos from Carmelo Anthony's charity weekend in Puerto Rico. Raymond Felton, Amar'e Stoudemire, and Fat Joe were there, and if you look closely, you can find Glen Grunwald rocking the "towel over the shoulder because I'm a cool guy" look in one photo.

- In this interview (found via Spencer Hall of Salt City Hoops), Raja Bell lists New York as one of his "likely destinations". Raja's probably just pulling a Grant Hill, but I figured I'd mention it.

- Here's Nate Taylor's piece describing the process by which Hakeem Olajuwon became such a friend of the Knicks.

"I think anything is a bargain with me, whether I’m playing for a dollar or $20 million it’s a bargain because I’m going to play hard no matter what," Smith told SNY.tv. "No matter how much I get paid, it will never affect how hard I play and I think that should be thought about when people see me next year."

- And here's li'l Chris Smith discussing the task of proving that he's actually a good basketball player and not just an appendage of J.R.'s.

- Jonah from the Knicks Wall and Brobert (pronounced bro-bear) Silverman of Knickerblogger take a walk through the history of Knicks uniforms. You'll laff and you'll learn stugh.

- John Schuhmann shared this gem of a YouTube video of the 2007 Hornets performing some half-hearted Globetrotter tricks. Tyson Chandler tries his best (Ryan Bowen and Peja Stojakovic do not).

- Kirk Goldsberry previews some of his work with a snapshot of where assisted corner threes tend to come from.

Enjoy your morning of work/school/Judaica! <3