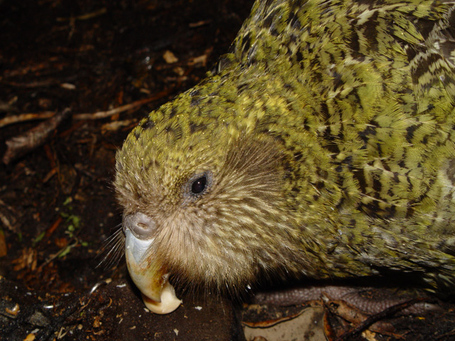 Good day, picnickers! I hope you've all had satisfactory mornings. If you haven't, I have some kakapos for you.

- Kakapos might be the best bird. It would take me thousands of words to cover how completely wonderful they are, but here's a start: 1.They are giant parrots that live in New Zealand. 2. They are flightless, so they just hop out of trees. 3. They are awkward and defenseless in pretty much every respect. 4. The males dig massive bowls into the Earth and use them to amplify their mating calls across the hillside. 5. There are so few of them on Earth that pretty much all the living ones have given names. 6. This. If you want to know more about kakapos, check out that Wiki, and I also highly recommend Douglas Adams/Mark Carwardine's Last Chance To See, as well as the subsequent documentary (which I believe spawned that video I linked. Conversely, if you have more kakapo reading suggestions for me, I'd love to see them.

- Jerome Jordan is going to camp with the Grizzlies, in case anybody was wondering. I was.

- Uhh, yeah, Toney Douglas is probably dreading having his parents sign this report card for his 2011-2012 season. Still miss ya, Toney. I don't care what they (and I) say.

- Here's Carmelo Anthony talking with Jared Zwerling about his weekend in Puerto Rico.

- Walt Frazier's on a bus now, as he damn well should be. Also, this is really frightening:

Frazier: My Knicks contract is up, but we're negotiating. I'm hoping to do that as long as I can, hopefully four or five more years.

The notion of a regular Knicks broadcast without Clyde makes me feel like crying.

- John Shurna, who went to a very medieval-sounding high school, gave an interview to his local paper.

- Something something about business and James Dolan and the Knicks and the Nets.

- Here's a thing about the Knicks and Nets.

- I reallllly want Iman Shumpert to strip somebody, go coast-to-coast for a big dunk, then scream "ARE YOU NOT ENTERTAINED!?" at the MSG crowd this season.

- The Knicks are pretty doomed for their next match-up in the SB Nation hypothetical three-on-three tournament thing.