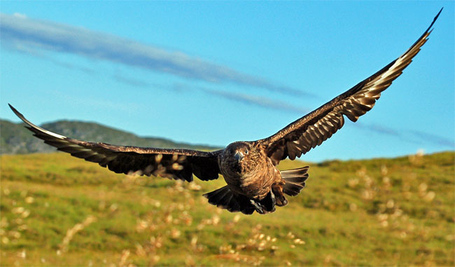 Good morning, friends! It's been a while, I know. I've been traveling, the Knicks have been totally silent, and I am easily distracted. I can report that I'm working on some stuff-- a couple longer cons that will hopefully entertain you at some point in the future-- but right now, shit's silent and that's fine with me. We'll be buns-deep in basketball in a matter of weeks. For now, all we have are rumors and "person says thing" stories. Here's a quick rundown of links, none of which will be particularly novel or titillating.

- YEAH THAT'S RIGHT, we're doing birds now! I finally made the decision to switch last night when I was watching Frozen Planet and a great skua was trying to kill a goddamn owl but the owl kept doing backflips to reveal its talons and fend off the attacker. Also, I have a pet bird now, so I'm really into birds now. Welcome to the bird era.

- There have been rumors about Josh Howard and Sean Williams, and I keep seeing names like Andray Blatche and Chris Andersen pop up. I'm sure they've all been considered, but pretty much we're seeing now looks agent-generated and probably not worth getting worked up about. I'd obviously love to finally have Chong Williams in orange and blue, though. It's been a long time coming.

- That SB Nation three-on-three tournament is underway, and our P&T-selected squad is up against Milwaukee's in the first round. I have a feeling the dice will favor the Knicks (this is being decided by weighted dice) this time around, though I am perpetually terrified of Ersan Ilyasova.

- This is why you invite Amar'e Stoudemire to your seminar about fathers and fatherlessness:

"Create that kingdom," Stoudemire said. "There needs to be a lion and lioness. Make sure you find the right queen -- and stay with her."

- Regarding some comments from yesterday, note that Josh Harrellson hasn't actually signed with the Heat. He's just headed back to Miami for another workout. Jorväld Harrüllsson remains available.

- Remember this commercial? Just stumbled across that this morning.

- The Knicks will officially reveal their new uniforms on Thursday. They've been gradually strip-teasing the new look in the days prior, and it does appear that the video game versions we saw a couple weeks ago were accurate.

- Iman Shumpert (politely) says he's the best rapper in the NBA. I say we have to give every single player a chance to rap before decide that.

- I imagine the Knicks will drift leftward on this chart next season. I hope they drift upward, too.

That's what's up! Training camp is but weeks away, children.