Here are the Knicks' new uniforms.

Share All sharing options for: Here are the Knicks' new uniforms.

I'm writing this sentence at 11:10 and the press conference unveiling the Knicks' new uniforms hasn't even started yet, but the bros in attendance are already tweeting photos. Here, via Jared Zwerling, is one of those photos of the new home jersey: 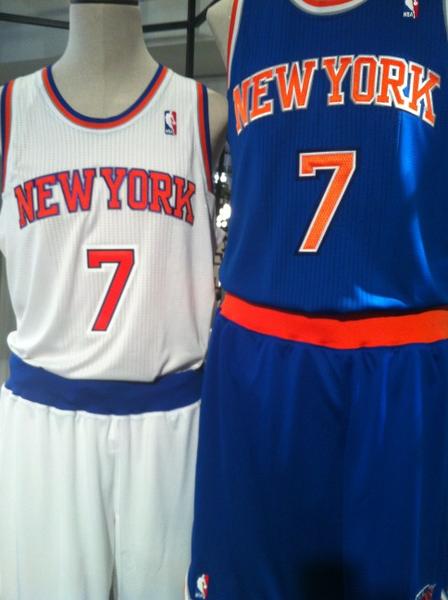 You can see that this is, indeed, the same one Amar'e Stoudemire wore on that Katie Couric Kelly Ripa show yesterday. It's got the lack of black, the lack of side piping, the flatter "NEW YORK" and the weird neck piping that stops at the armpit just like the designs we saw a few weeks ago, but it also has a round collar with no gray (Update: Okay, maybe less gray?) in it, which, to me, is a massive improvement over those video game mock-ups (there's a little gray on the aways, but it's thin). Here's a closer and better-lit look from Darren Rovell wherein you can see the "ONCE A KNICK, ALWAYS A KNICK" lettering inside the collar. That's cool, I guess, especially if it means that, like, Zach Randolph and David Lee and Jeremy Lin and Lavor Postell and so forth will be reporting for training camp.

Especially without that V-neck, I like these. I like 'em a lot. I look forward to watching the Knicks run around in 'em and maybe win some games sometimes.

Oh! The unveiling is starting now. I'll add any other photos and links I can find.

Update: Here's the back of the jersey. It's got that "Knicks" basketball icon on the back instead of the old "NYK" token logo.

Update: Here are Amar'e Stoudemire and Tyson Chandler in uniform (on top of a building, obviously). They've even got their arm sleeves on.