Welcome back to the Kingdom, everyone!

Did you enjoy your compulsory Knicks vacation? I sure as hell didn't. Let's get some games!

I hope you haven't forgotten how to hate in the past week, cuz we got ourselves a couple good ol' fashioned Atlantic Division donnybrooks on tap. These are crucial match-ups, both in the standings and in the hearts and minds of Knicks fans everywhere. If the Knicks win these two games, the P&T post-game comment sections will run on like an endless green carpet of rec's. If the Knicks lose, the game threads will become a battleground as Seth fights off a blitz of defiant trolls with names like isiahsuxxx69.

"The arc of the moral universe is long, but it bends toward justice"

Now let me ask you this: would it truly be justice for the Russians to win a game played on Martin Luther King Day? Somehow, I think not.

By now we have a pretty good idea of who these Nets are. They play slow as hell (dead last in pace), score efficiently (7th in O-Rating) and rarely defend (19th in D-rating). In short, they play a very similar game to the Knicks. They dominate lesser competition (15-0 against sub-.500 teams), and struggle a bit against the top teams (8-16 against plus-.500 teams). There's a lot to admire there - they haven't been the equal of the Knicks thus far, on offense or defense, but they've stayed close in the standings by taking advantage of every single opportunity for cheap wins. You can't say the same about the Knicks.

You can't really claim their recent win streak was solely the product of a soft schedule - they did beat their share of sub-.500 teams, but they also beat the Thunder and Pacers. Have they turned a corner? Is P.J. Carlesimo the new Mike Woodson? I guess we'll find out soon enough.

We'll also find out soon enough whether or not the Nets will be sending a representative or two to the All-Star Game. If any Net goes, it should be Brook Lopez. He's having an all-star-type season; the progress in his rebounding is annoying for a guy who enjoyed cracking "Lopez can't rebound" jokes as much as I did. He has assumed the mantle of "Nets' best player" with a thoroughness that is a bit startling.

I'm worried about this match-up for a number of reasons. The Nets will be playing with momentum, whereas the Knicks will be playing with the built-in excuses of rust and jet lag. The Nets seem to have much more to play for - they can even the season series, cut the Knicks' lead to two in the loss column, and control the narrative for the rest of the season with cliches like "we're a different team with P.J." and "BK takin' OVA, son!!!!"

As you may have noticed, my worries are based more on narrative than actual facts. The simple fact of the matter is that the Nets have yet to prove they can stop Carmelo Anthony. Melo has repeatedly spanked the Nets like the proverbial Tri-State Area redheaded step-child they've always been - 37.0 PPG in three games. The second half of last month's game at the Garden was especially telling: the Nets threw panicky double-teams at Melo some thrity feet from the basket, Melo ran the offense like a taller Jason Kidd, and the Knicks ran away with the game. Does P.J. the head coach have some awesome strategy that he never revealed to P.J. the assistant coach, or will Melo get back on the MVP track against his favorite whipping boys? Hopefully Melo uses a good performance here as a launching pad for...

Note: this is officially a KG-free zone. I'm ignoring him. He should be ignored...catch my drift, Melo?

You gotta hand it to the Celtics: they lulled us to sleep with a terrible start and a Rondo suspension, then they strutted into the Garden and kicked us right in the metaphorical junk. If there were any lingering debate over which Atlantic rival should be most despised by Knicks fans, I hope that game put it to rest. The Nets and their fans have only just tasted true national relevance and media clout; Boston teams, with their endless parade of national sports media figures, wallow in it 24/7. Beating the Nets is a feather in the cap; beating Boston is freakin' holy crusade. With the Bruins spoiling the Rangers season debut last night, and with no Eli Manning to stand between the Patriots and another title, the Knicks need to step up and defend New York's honor.

It's already a given that everyone will be focused on Carmelo Anthony in this game. This hasn't exactly been the most impressive stretch of Melo's otherwise remarkable season - in the span of a single game, "Melo the MVP candidate" devolved into "Melo the punchline and unwilling breakfast cereal pitchman." I even caught this "congratulatory" post on Weibo's official Knicks account: 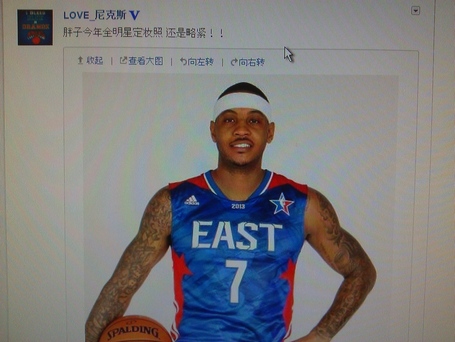 Melo doesn't really deserve all the criticism and fat jokes heaped upon him recently...not with him in the middle of perhaps the greatest season in franchise history and all. But if Melo really wants to ascend to the pantheon of Knick legends, these Celtics games are huge for him. Real Knicks hate the Celtics; great Knicks beat the Celtics. He's shown that he hates the Celtics...and I appreciate that. Now he has to show he can beat them.

Melo is now 2-8 as a Knick against the Celtics, including playoffs. Somehow, I get the feeling that this stat will be mentioned quite a bit in the next few days. His performance in those games has been a bit of a mixed bag:

It's hard to say that the Celtics have consistently shut him down - he's put up all kinds of fine statistical performances these past three years, and he's often compensated for lackluster shooting performances by getting to the free throw line (that was a real problem in their first game this year - the lack of calls). But, as it so often was with the Melo of old, the counting numbers can be deceiving. The Knicks need the Melo of November - the guy more interested in maintaining a fluid offense than getting points. Not that Melo has been the only one guilty of this recently (I'm looking at you, J.R.) but the stagnant, iso-heavy offense that the Knicks showed during their three-game losing streak was a disturbing reminder of the past. If the Knicks aren't going to defend like they did last year - and they have rarely showed any interest in doing so - then they sure as hell can't revert to last year's offense and hope to win games.

On the other side of the court, the Celtic player everyone will be keeping an eye on is...forget it, I'm not talking about him. I'm ignoring him. Let's all ignore him...catch my drift, Melo.

In fact, I'm going to try something new. I'm not going to hate on any of the usual Celtics - what more is there to say, really? Instead, let's focus on hating a new Celtic. Ladies and gentleman, I give you Jeff Green.

Why Jeff Green? Because he torched the Knicks in pre-season, causing me to develop an irrational fear of him. Then, he totally sucked ass for most of the year, causing me to let down my guard...only to watch in horror as he dropped 16 points on the Knicks. TCM: Total Celtic Move. Sixteen points doesn't sound like much...but we're talking about Jeff Green here - he's only topped that four times this season. The Celtics might just have found themselves a genuine OSKA - Otherwise Scrub Knick Assassin. Yes, Jeff Green has inspired TWO acronyms!

Now you might be saying to yourself: "Is it really okay to hate on Jeff Green? I mean, he came back from a heart condition. He's an inspirational story!" Well, allow me to retort:

That's all I have to say about that: hate Jeff Green, hate Red Auerbach, hate leprechauns. GO KNICKS!