Seems like everybody I know was born this week; and what makes a better (and cheaper) gift than a basket-full of Knicks wins?

I moved to China on Jan. 8, 2007, which means I recently celebrated my six-year anniversary in the Middle Kingdom. During my time in China I've seen two Summer Olympics and two presidential elections. I've seen the Giants beat the Patriots in two separate Super Bowls, four years apart. But I had never seen...

...I think you know where I'm going with this.

I guess a win against the Nets would have meant more in the grand scheme of things , but TROLOLOLOL SCREW U BOSTON!!!!!

The Knicks won't have another "statement game" for a while. Instead, they have a slate of boring-but-winnable games against struggling opponents. They all count the same in the standings, boys.

Hold onto your seats, cuz I'm about to hit you with some grammar: 人 means "people", but 76人 does not mean "76 people". For that, you would need the counting word 个: 76个人. I'd have to imagine this name makes little sense to Chinese people who don't know about U.S. History.

Birthday update: Hey dad, remember when you joked that you would accept a birthday shout-out on Posting and Toasting in lieu of an actual gift? Well, be careful what you wish for...and happy birthday.

Things are getting weird in Philly. How weird? I dunno, how about a four-part, three-blog cage match between Grantland, Liberty Ballers, and Orlando Pinstriped Post on the subject of Nikola Vucevic? Yeah, that weird. When you trade Andrew Bynum for Andre Iguodala, and six months later all anyone can talk about is Nikola Vucevic, you know things have gone off the rails.

Bynum is still out, still smirking, and still growing that hair in an attempt to inspire crotchety old Philly sports writers to break to world record for most "what's with these lazy, good-for-nothing kids and their rap music?' articles. I'm starting to think that Bynum is perhaps a brilliant amateur sociologist, or that he's secretly filming one of those bizarre James Franco/Joaquin Phoenix art projects. Either way, it doesn't exactly help the Sixers on the court.

The front office came into this season with a plan: bring in Bynum and form their own Big Three with him, Evan Turner and Jrue Holiday. It hasn't turned out that way, but remember what the poet said: 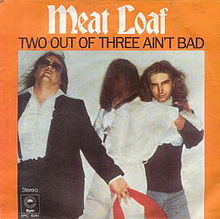 Jrue Holiday has made the leap to legit all-star this season, but Evan Turner hasn't played up to expectations. I guess that makes this a "one out of three" situation, and Meat Loaf never told me whether that was good or bad. But the Sixers still have Thaddeus Young, who's having himself a fine season. So I guess that's two-out-of-four, which can be reduced to one-half, and...damn it, I'm no good at fractions. HELP ME, MEAT LOAF!

These teams haven't played in a while -- nearly three months ago, they engaged in a home-and-home series that still makes me smile. I don't think I've ever seen a Knickerbocker team dominate an opponent in a home-and-home like they did the Sixers. They won both games by a combined score of eleventy-billion to -3.

This game will be an interesting barometer for the Knicks. The Sixers are pretty much the same team that they rolled back in November. The Knicks, however, are far from the same team that did the rolling. How far have they fallen? If they lose this game, we'll have the answer: pretty damn far.

Birthday update: So who's the young lady spoon-feeding the kitten in the headline photo? That's Ma Su-mei, my wfie's grandmother (lao-lao), who will be celebrating her 84th birthday. Eighty-four years in China in no small feat: she lived through the Japanese occupation, the Communist-Nationalist Civil War, the Great Leap Forward and resulting famine, the Cultural Revolution, and that damn Gangnam Style craze. Last year she broke with 5000 years of tradition by insisting the family cook a big plate of bacon for me and her during the Chinese New Year dinner. Bacon is awesome, and so are you, Lao-lao!

Are you ready for a depressing trivia question? Guess how many over-.500 teams the Knicks have beaten in the past month.

Now, are you ready to hear something that is the opposite of depressing? The Knicks' win against the Celtics doesn't count, because the Celtics are below .500. -- gets off the couch, does an awkward white person dance to Kool and the Gang --

The Hawks present a fine opportunity to rack up a quality win against a reeling opponent. I believe many Knicks fans -- myself included -- have subscribed recently to the paranoid idea that every Eastern contender has been kicking ass except the Knicks. That's far from true -- in fact, all three of the East's top teams through the end of 2012 hit a bit of a skid in January:

Unlike the Heat and Knicks, the Hawks have dropped in the playoff standings (now 6th). And things are only getting worse down in the ATL. Lou Williams is out for the season, Al Horford is gimping around on a bum hamstring, and apparently Josh Smith has started a proxy "Not asking you to trade me or nothin', but..." campaign.

The stars of Josh and our own J.R. Smith have always been somewhat aligned -- they were chosen one pick apart in the 2004, straight of high school, and I imagine the two of them save of boatload of money by bulk-purchasing "J. Smith" bath towels from Bed, Bath and Beyond. Josh has been the superior Smith through most of their careers, but J.R. has held his own in the advanced stats this year.

J.R.'s lead in the WS/48 category comes courtesy of Josh's unfathomable -0.7 offensive win shares. Josh has often been a one-dimensional player -- albeit a player whose one-dimension, defense, was so awesome that it covered for everything else. This season he's embraced the Dark Side on offense -- the long two -- and it's crushing his offensive value. Hey, that sounds like another J. Smith I know!

On offense, the Hawks are basically Knicks-lite -- they shoot the three well (and often), but they turn the ball over like nobody's business (28th in TOV%). I'd really appreciate it if the Knicks guarded Kyle Korver (.460 3P%). Speaking of Korver, am I only one who has ever looked up Kyle Korver's middle name just to make sure it doesn't start with 'K'? In case you were wondering, it's Elliot. Good job, Kyle Korver's parents.

Nothing makes a basketball writer happier than writing about a dark horse MVP candidate. Well I got a dark horse for you -- a horse darker than a black steer's tukus on a moonless prairie night...Glen 'Big Baby' Davis! Hear me out: when Glen Davis went down with an injury, the Magic were 12-13 and on the cusp of the 8th seed. After he went down with an injury the Magic lost 10 in a row. Now that's valuable! Of course, the Magic haven't played well since Davis' return, so that means I can write a series of nasty articles about how Davis is ruining his MVP candidacy with lackluster play, right? Now, do I really believe Big Baby is an MVP candidate? Do I really believe in anything?

I'm just playing with y'all...the Magic straight-up suck. In fact, sucking is probably a key part of their organizational strategy at the moment. I sometimes wonder if Orlando's GM looks back on all those early-December wins with a tinge of regret: Think of all the ping-pong balls we lost!!! Let's help the guy out, Knicks.

The match-up to watch, both in the Hawks game and the Magic game, might just be Amar'e Stoudemire vs. the opponent's interior defense. Amar'e has put together a string of good performances recently, but he's still struggling to finish. Instead, he's been getting his points from the line -- I joked during the Celtics game that he seems to have studied at the Danilo Gallinari School of Awkward Foul-Drawing. Well, the Hawks can guard the paint, and they are adept at limiting fouls - 5th in the NBA in fewest free throws allowed per field goal attempt. The Magic are far less adept at guarding the paint, but also stingy with the fouls (7th in opponents' FT/FGA). STAT will have to bring his A-game, because neither the Hawks nor the Magic are likely to bail him out.Here's hoping the return of pitbull pick-and-roll maestro Raymond Felton will lead to more old-school STAT throw-downs, and fewer new-school STAT baseline spins into the bottom of the backboard.