We got three lemons here, hopefully Melo and the gang can make three pitchers of lemonade. 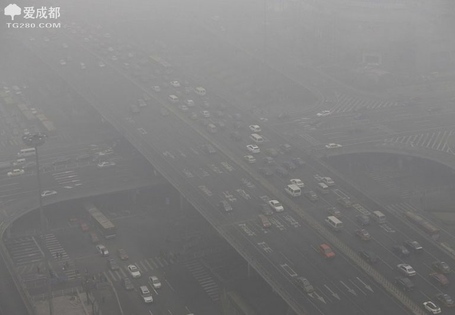 If you've been reading the news recently, you know that breathing the air in Beijing has become something akin to drinking three cups of cigarette ash per day, only without all that tasty nicotine. The weather is as depressing as it is noxious. Luckily, I have an exciting slate of Knicks games to look forward to:

Sweet Jesus! This is all we get? No division games, and no real rivals. Maybe you consider the Pistons rivals because they unleashed Isiah Thomas on the world. Personally, I think that's pushing the rivalry envelope a bit. As for the Bucks and Kings...please, don't even try.

Still, we must soldier on. A win is a win, and we can't beat the Celtics every week -- except in my fantasies.

Why this match-up should depress you: You and I watch basketball for free, presumably because we get some measure of enjoyment out of it. Now, imagine you are Scott Skiles. You eat, sleep, breathe, crap, and freebase basketball. And a team is willing to pay you millions of dollars if you're willing to just sit on a bench and watch the Bucks play out the rest of the season. What does Skiles do? He says to the Bucks organization -- and I'm paraphrasing here: "Nah money, I'm good." Then he heads back to his house, most likely to paint a regulation basketball key area on his living room floor and yell at his dogs whenever one stands in the painted area for more than 2.5 seconds. Yep, these are the Bucks.

What could possibly make this match-up interesting? The Bucks are playing well under interim head coach Jim Boylan...but who cares? Who the hell is Jim Boylan? I'm bored, Bucks, you're boring me.

There is only one man to lead the Bucks to the mountaintop. If you wanna be the best, Milwaukee, then you gotta get "Milwaukee's Best"...or at least the guy who used to own a yacht named "Milwaukee's Best" until it got auctioned off by the IRS. That's right, I'm talking about Latrell Sprewell -- the Knick great, loud music aficionado, and anti-tax hero straight out of an Ayn Rand novel. With the exception of Charles Oakley, I can't think of another ex-Knick I would rather see on the bench than Sprewell. Spree with real authority? Sign me up! Let's take it a step further -- bring in an HBO camera crew to film Coach Spree stopping practice to check Google Translate so he can explain to Ersan Ilyasova in Turkish: "If you keep playing like a bitch, I'm gonna slap you like a bitch."

Plus, the guy looks quite dapper in a suit: 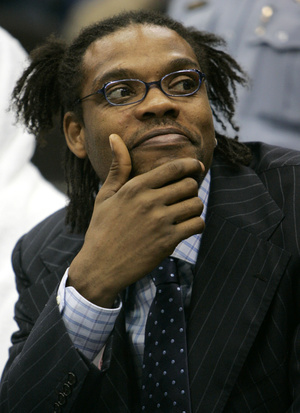 Spree or no Spree, this game is far from a cakewalk. The Bucks are currently experiencing the rejuvenating effects of New Coach Smell. Check out their per-100-possession numbers:

That's basically a five-point swing. Oh Lord do I ever hate playing a team with the heady musk of New Coach Smell -- it's like playing against 12 dudes bathed in a mix of Michael Jordan and Derek Jeter's brand cologne. It's a formidable scent...stings the nostrils, in a good way. I'm gonna be honest, Bucks, you smell like pure gasoline.

This game could be similar to the Hawks game - good, but not great team coming to the Garden on a bit of a roll - but there are a few more things that worry me about the Bucks. One, they are good at limiting the three - 6th in the NBA in opponent's 3P%. It might not be so easy to get the absurd number of open looks the Knicks were gifted by Atlanta. Also, the Bucks have not one but two quick guards who can get into the lane in Brandon Jennings and Monta Ellis. Jennings is the better player, and a bona fide Knick-killer to boot, but either player could pose a problem for the Knicks' notoriously porous defense. Will Mike Woodson stick Iman Shumpert on Ellis or Jennings...or will he go back to his Hawks game plan and stick Shump on a jump shooter? Or will he ask Shump to go get him some Skittles? The answer to these questions might very well decide the game.

Why this match-up should depress you: Hmm...let me think. Is there anything depressing going on with the Kings right now? Nope, can't think of anything.

What could possibly make this match-up interesting? I got two words and one comma for you: revenge, bitch! One December 28, the Knicks lost one of the weirdest games in recently memory -- the 22-point second-half comeback, James Johnson buzzer-beater game. In case you were wondering: yes, James Johnson has hit more than one three-pointer this season. He hit a three in his next game - December 30, against the Celtics - and hasn't hit one since. So that's two for the year; personally, I'm disappointed. I was hoping he wouldn't hit another one all year, just so I could have a story to tell my grandchildren whenever they say "What could go wrong?"

"I'll tell you what could go wrong...gather 'round, kids, and let Grampy tell you about the time James Motherfucking Johnson hit his only three of the year to beat the Knicks at the buzzer."

And yes, I plan to cuss at the children when telling the story.

When looking at the Kings roster, "ball-movement" and "sharing the offensive load" don't exactly jump to mind, but that's exactly what they did against the Knicks, with six players scoring in double-figures and four (DeMarcus Cousins, Marcus Thompson, James Johnson and Jimmer Fredette) scoring at least 15. Gotta shut down one or two of these dudes, Knicks.

Nevertheless, the Knicks went into their last meeting without Carmelo Anthony and the suddenly-relevant Amar'e Stoudemire (how good does that feel to type!). This is a game the Knicks should win.

Now for a bit of trivia:

Check for the answers at the bottom.

What could possibly make this match-up interesting? Nothing...but in honor of the dearly departed Tayshaun Prince, let's all take a look at one of my favorite non-Knick-related playoff moments of all-time. Next time, don't go up like a bitch, Reggie.

These two teams last played in London on Shumptober 1st, a.k.a. the dawn of the new Shump reign. Since then it's been a mixed bag of decent offense and underwhelming defense. Here's hoping, as Amar'e has shown the rust coming off on the offensive end, the same will happen with Shump on the defensive end. And the sooner the better. The problem with a team that can't stop speedy guards is this: nearly every team has at least one speedy guard. It might seem weird to a Knicks fan, watching Kidd and Prigioni every day, but guards are usually speedy. It is for that reason I'm less concerned with the newly-acquired Jose Calderon -- a slower, headier point guard type whose game plays right into the Knicks defensive wheelhouse -- than I am about Will Bynum, who torched the Knicks for 22 points in their last meeting.

In the front-court, the departure of Prince probably means more time for rookie freak-of-nature Andre Drummond. This can only mean good things for the Pistons in the long run, but it might not hurt the Knicks in this game. Drummond will need time to mesh with fellow big Greg Monroe -- there's a reason coach Lawrence Frank has kept these guys separate. As we've seen with the Amar'e-Chandler pairing, even veteran bigs need time to solve spacing and timing problems on offense. Here's hoping Monroe and Drummond figure it out...after the Knicks game, but in time to make a run at the Celtics for the eighth seed.

I tried to subtly work in another Sprewell angle here, but I couldn't think of any way to do it subtly, so forget subtle! During my lengthy Spree research I came across this confusing report from Big Lead Sports:

"I was in town this past weekend, walked into 720 [night club], and the first thing I saw was him walking out the front door with some white chick getting in his Benz S-Class sedan parked in his spot right out front. The maybach must have been taken by the bank. He had his face painted as the joker."

Nothing here seems particularly un-Spree-like -- this article is from Nov. 3, so he could have painted his face for Halloween. Or maybe he does this every Friday night when he goes to the club. Neither would surprise me. Please, somebody get this man a head coaching job!