A special one-game preview for the team we all love to hate.

I tried...really, I did. I tried to treat this as just another game, tried to tie it into the regular four-game Middle Kingdom Preview lineup. But as the words and insults and vitriol starting flowing into this article, I found it hard to stop. This isn't just another game, at least not for me. My hatred for the Celtics is too strong - forged by years of bad beats, 0-for-8 campaigns, and Pierce's stupid home run trots. Therefore, allow me to present you - in the spirit of bitter obsession one might expect from a jilted stalker or a Nets fan - with special all-Celtics edition of Middle Kingdom Previews.

If you take the three characters "kai-er-te" literally, then there is no meaning. There are only two NBA team names whom the Chinese have deemed worthy of phonetic translation - the Celtics and the Knicks (ni-ke-si). Like many East Asian languages, Chinese doesn't lend itself well to direct phonetic translation of Western names (ex: "William Shakespeare" becomes "sha-si-bi-ya"). "Kai-er-te" is as close as they can get to "Celtic", so the name "kai-er-te ren" means "Celtic people." Personally, I don't like the name...mostly because I don't consider Boston Celtics to be people.

Throw out the records, as the old cliche goes, when the Knicks and Celtics get together. This is one cliche I happen to agree with. I will always fear the Celtics, no matter their record. I won't even bother to look at it.

I doubt the Celtics themselves care too much about the current standings. As I've said before, Boston is the prototypical "Shaq team" - the regular season is just an extended training camp as they prepare for the playoffs. Still, the Celtics are in danger of playing themselves into a tough first-round road playoff series. They're going to have to right the ship, and fast, or their road back to the Eastern Conference Finals will be all-but-impossible.

The Celtics have proven themselves to be a remarkably consistent offensive team - 27th in offensive efficiency last year, 25th this year (I said "consistent", not "good"). They have been so bad for so long on the offensive end that they could ill afford any slippage in their legendary defense. Well, the slippage has come this year - 1st in defensive efficiency last year to 11th this year - so their record doesn't really seem that surprising.They are playing a game above their expected W-L record...oh, those Celtics, so full of grit and intangibles.

The players they brought in - Jason Terry, Courtney Lee - have struggled. Even Jeff Green, scourge of the Knicks' preseason, has struggled this year - who would have guessed it was a bad idea to sign mediocre players with heart conditions to long-term deals? Somewhere, Isiah Thomas is nodding his head in agreement.

That's the good news...now here's the bad news. Avery Bradley is back, and that kid can really play. The Celtics have notched two impressive wins (Pacers and Hawks) in the three games since his return. Oh, and Rajon Rondo still exists...somebody on the Knicks should learn how to guard him, maybe even during the first three quarters of the game. I have little hope that the Knicks' guards can stay in front of him. The Celtics do not shoot the three well (or often) and they are the worst offensive rebounding team in the lead, so here's hoping the new Tycus Cambler front-court can maintain discipline when Rondo gets into the paint, keep him from creating havoc. If they're successful, the Celtics will have few options on offense. If they fail, then the Knicks could be in for a long night.

That's the bad news...now here's the news that might cause you to lose control of your bowels. Paul Pierce is still playing...and playing well. This is the point in the article where I should begrudgingly offer some praise to the man for playing at an all-star level in the same season his former college teammate Jacque Vaughn became a head coach. Anyway, forget all that...I'm not praising him and you can't make me! In fact, I'm going to do the exact opposite - create wild, venomous speculation, Skip Bayless-style. I have it on good authority that Paul Pierce drinks a pint of baby panda blood each day to stay young...prove me wrong, somebody! I hate you, Pierce!!!

As always, I'm terrified of Pierce getting the ball at the end of a close game. This guy is on the Mount Rushmore of Knick-Killers. And with Ray Allen gone, I don't really fear any other Celtic taking that last shot. With that in mind, I've created a fool-proof end-of-game defense designed to shut down Pierce. It's based on the "box and one" hybrid-zone: I call it the "one and box". Instead of one defender playing man and the other four defenders playing zone, my defense calls for Tyson Chandler to play a one-man zone while the other four Knicks form a box around Pierce as soon as he catches the ball. Observe: 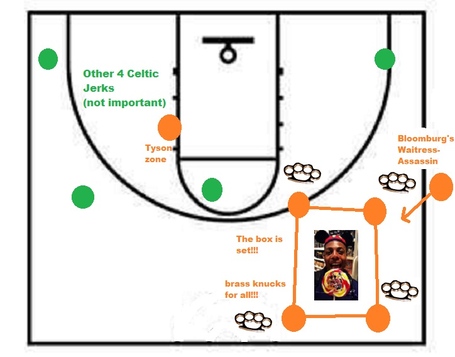 The key here is timing - once the box is set, Bloomburg's Waitress-Assassin needs to step in from the sideline and cold-cock Pierce with a chair before he can call a timeout. Ballgame.

Finally, we come to Kevin Garnett - the lynchpin of the Celtics' defense. Really, what else is there left to say about KG? The man is a shark, and when he smells blood in the water...

Words cannot describe how sorry I am that Iman Shumpert will not play in this game. Still, the other Knicks cannot use his absence as a crutch - KG must be dunked upon, in the most humiliating way possible. Which Knick should have the honor of dunking on KG? Read over the list of candidates, take the poll at the bottom of the article, and let your voice be heard!

The guy has been known to pull off a dunk or two:

But I, for one, find this choice a bit unimaginative. J.R. has been dunking all over the place, and there's no shame in being dunked on by T-POKE (the player occasionally known as Earl). I want Garnett humiliated. Though J.R. could earn some serious bonus points by giving his mom a shout-out mid-dunk.

An interesting dark horse. The guy certainly has the ability to dunk on KG, and it would be pretty embarrassing if he suddenly found the Knicks' twelfth-man's nuts in the immediate vicinity of his face. As an added bonus, White can remind him on the way down that the two of them have the exact same number of championship rings (one).

Nothing would say "STAT is back" quite like throwing down in KG's grill.

A little sugar to go with that spice. Garnett is famous for his hatred of rookies and foreigners, so nothing would sting the man quite so much as getting posterized by Lotso-Huggin' Pablo, a.k.a. the Latin Ryan Gosling. Plus, I'm sure we'd be treated to the greatest post-game interview of all time, where an impossibly humble Pablo tell KG he's "sorree" and promises to send him a muffin basket to make up for his lack of manners on the court. 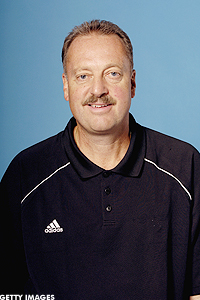 I feel good about the Knicks' chances here...especially if we can get assistant coaches to dunk on KG and courtside waitresses to attack Pierce with a chair. If given the chance, I would certainly prefer the Knicks to pour it on - no need to take out the starters in this game, Woody. If the game remains close into the fourth, we might just see a Melo-Pierce duel for the ages. If Melo truly wants to stake his claim to the greatest Knick season of all-time, I can't think of a better to way pad the old resume than beating Pierce head-to-head. I'm just hoping my heart can take it.