The Knicks either can't or won't defend quick point guards, so they had endless trouble with John Wall, and everything just collapsed defensively from there. Bigs defending the pick-and-roll positioned themselves wrong, help arrived late, perimeter guys overplayed close-outs, and so forth. It sucks, because they played a somewhat clean offensive game. Somewhat clean just isn't gonna do it when you're giving up open shots and fouling as much as the Knicks were on the other end. So they lost again. To the notes!

- My household operated under the Finish Your Dinner If You Want Dessert edict, but my brother and I routinely tried to work around that. We'd present our not-quite-empty plates to our mom and ask her if our progress was sufficient-- "does this count for dessert?". No, she'd say, you have to finish the whole thing. So we'd take another bite, push the remaining food around some more so it was dispersed around the edges of the plate, and ask again. But no, it's simple, you finish ALL your dinner if you want dessert. This is how I feel about New York's pick-and-roll defense. The guards will grit their teeth and shuffle their feet in order to deal with a pick, but not actually make enough effort to push through. The bigs will play up high as if to trap without actually applying pressure on the ballhandler. If you're going to get over a pick, you have to get over the pick. If you're going under, you have to go all the way under. If you intend to trap, you must trap. Moving generally in the right direction to demonstrate that you know what you're supposed to be doing without actually doing it does not count for dessert.

- And while Andrea Bargnani played typically solid post defense against Marcin Gortat, he is mostly who I'm talking about here. I had no problem with him hanging back in pick-and-roll coverage to invite a John Wall mid-range jumper. Wall hit many of those, but you kinda just have to take that. I did have a problem with him "trapping" by just kinda stopping out at the perimeter. Failing to recover such that Gortat could draw fouls and get put-backs kinda sucked, too.

- This is not me accusing Carmelo Anthony of fake hustle-- because he often gives real hustle and worked hard for 12 rebounds and 23 points-- but it's kiiinda funny to watch him do the unnecessarily-high-jump-with-a-leg-kick-and-elbow-swing to grab an uncontested rebound then fail to rotate to the rim or close out Martell Webster on the very next possession.

- The Knicks realllly force the ball into Amar'e Stoudemire when he's on the floor and it's realllly ugly. He pretty much has to hit all his shots to make that practice even remote worthwhile...and he did last night! He dropped in a couple contested post-ups and made some quick moves along the baseline and in transition to dunk on folks. I did enjoy the moment in which Pablo Prigioni kept trying to post and re-post Amar'e, only to find him fronted and unreachable,  only to realize eight seconds into the process that he had an open three (which he made).

- Nice of the Knicks to miss nine of 15 free throws, too. Why not? J.R. Smith was particularly gracious, missing both when the Wizards did their Chick-Fil-A promotion where everyone gets free chicken sandwiches if the opponent on the line misses both shots. (That's a real thing. I witnessed it in person last year. They also shoot burritos into the crowd.) Say what you want about J.R. Smith, but you can't say he's stingy when it comes to giving out thousands of chicken sandwiches.

- Beno Udrih started again in Raymond Felton's absence. This time he didn't make anything good out of those out-of-control drives. He was just out of control. Beno's proven himself a reliable drive-and-kicker if he sticks to just that, but he keeps making more elaborate drives that appear to have potential, but end in disaster. And, of course, his going under picks contributed to New York's problems with Wall. Pablo's issue was more gambling in the backcourt and setting Wall free that way.

- I don't know why Iman Shumpert wasn't guarding Wall the whole time. He got beaten like everyone else did (and got beaten off the ball by Beal, too) but at least pressured some and forced a few turnovers up top. Those turnovers led to kinda scary run-outs, because Shump's totally in his own head around the rim, but they were better than no turnovers!

- I don't think I've ever seen J.R. throw a reallllllly high lob skip pass to an open shooter on the weak side, but he did that twice Saturday night.

- Good lord, was Metta World Peace out of control. The Knicks don't need to feature Metta the way they do Amar'e because Metta just features himself. The one open catch-and-three he made off a kick-out was very nice. Most everything else was awful.

- Both Pablo and Beno set Bargnani and Martin up for some trouble with pick-and-roll passes too far from the rim. It's a common problem, even when it's the Felton-Chandler pick-and-roll. Bargnani can at least hit that awkward short jumper (and he made a lovely extra pass inside to Martin under the rim one time). Martin just whiffs those shots. Kenyon did make some lovely passes from up top, though. I liked the play the Knicks ran out of a timeout where Melo cut across the baseline, established himself on the right block and kinda reverse-sealed his defender, then did a quick Dwight Howard spin move toward the rim to catch and finish a lob from Martin.

- Even with all the other shit, just missing open shots remains a problem. Late in the third, Melo caught a happy case of passing-out-of-doubles fever, but Pablo and Shump missed consecutive left-side threes that rattled out exactly the same way.

- The Wizards were in the penalty before the ten-minute mark of the fourth quarter. Here is New York's fourth-quarter shot chart from ESPN: 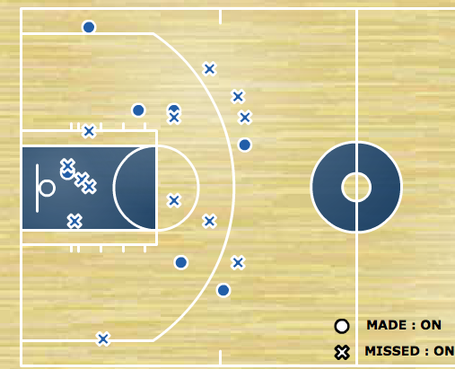 - On a night like that, I so cherish the moments in which Clyde says "Bargnarni" and "Gortart" in the same breath. It sucks that it was typically Bargnarni fouling Gortart or failing to box him out, but still.

- Again, no point guards in the last three or four minutes of the game. It was kinda already done at that point, but I still don't get it.

That's it. Whatever, just like Bronx Chica said. These losses are rote at this point. The Knicks stay terrible defending teams with quick pick-and-roll point guards. Next on the schedule: Damian Lillard, Chris Paul, Ty Lawson, Jrue Holiday. Shiiiiiiiiiit.