Nuggets 97, Knicks 95: "This has the ambience of a preseason game."

Share All sharing options for: Nuggets 97, Knicks 95: "This has the ambience of a preseason game."

Forgive the screen-shot-y jankiness, but before I get into my notes, I'd like to demonstrate the simple, oft-repeated three-step process by which the Knicks give up lots of baskets. It's basically: 1. Perimeter defender is compromised by bad positioning, bad pick navigation, or an unnecessary mismatch 2. Big guy feels compelled to help, abandoning his man. 3. Nobody helps the helper and the abandoned man gets an open shot.

There are variations on this progression-- for instance, sometimes someone *does* help the helper, but no one helps the helper of the helper and then the next guy is open--  but here are three examples of the basic three-step process:

1. Felton is out of position as Ty Lawson dribbles quickly up the floor, leading Shumpert to switch. 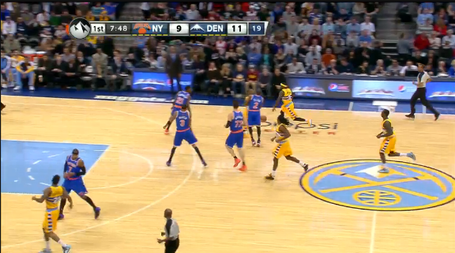 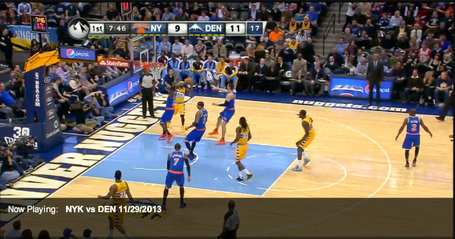 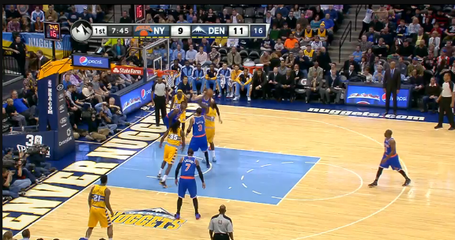 1. Carmelo Anthony unnecessarily goes under a Randy Foye pick, switching onto him and leaving Wilson Chandler for Iman Shumpert. 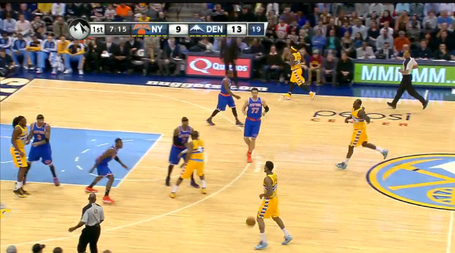 2. Bargnani feels compelled to help Melo on Foye, leaving Hickson alone in the paint. Foye could make an entry pass, but takes a similarly effective shot. 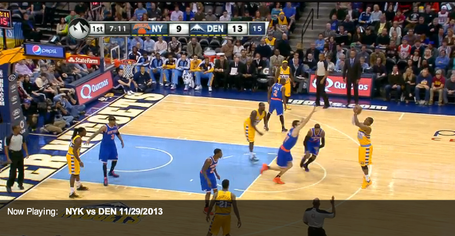 3. Nobody rotates, Hickson is free for the put-back dunk. 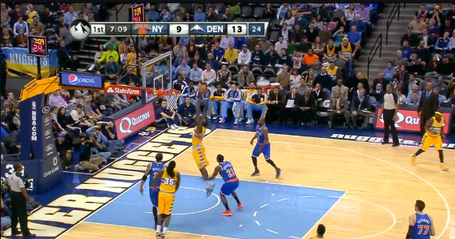 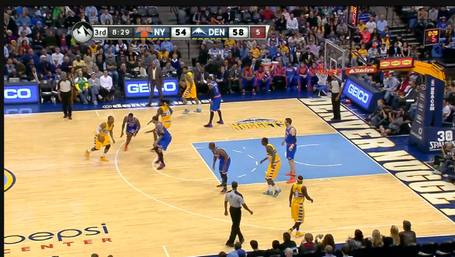 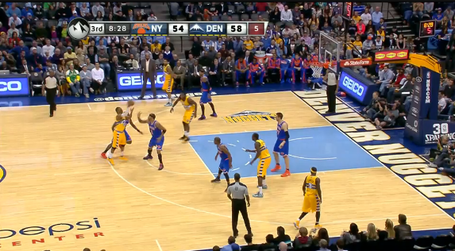 3. Bargnani rotates far too late, Faried has a wide-open dunk. 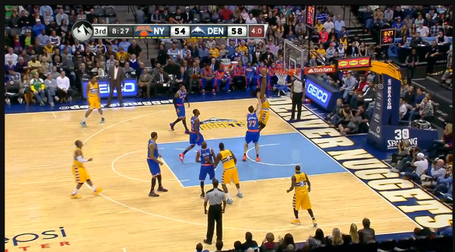 The three steps can get more complicated than that and contain sub-steps of their own (and the Knicks just get beat to the rim in one step sometimes), but you can almost always find that progression. It seems to me a failure of both distrust and trust. The guard is out of position and the big doesn't trust him to recover. The big then helps, entrusting someone else to take his man. Nobody else takes his man.

The Knicks are prolific breakdown creators and poor breakdown managers. The bad defense has been a recurring problem since even before Mike Woodson took over as coach, but it has for long stretches been obscured by a combination of healthy Tyson Chandler covering everyone's ass and the offense just playing too well for that bad defense to matter. With Chandler out and the offense operating well below an elite level, it matters a lot.

So there's that. Nothing new or different, just felt like hashing it out this morning. Some other notes on the Knicks' loss in Denver:

- Regarding the above, actually: All it takes is a decent pick or a push off a miss to set those three steps in motion. I felt at several points that the Nuggets weren't blowing the Knicks out because they got lazy and didn't bother to push for that initial breakdown. I'm not complaining. If well-equipped teams don't want to make the Knicks' defense fail, that's fine with me.

- CLYDE JAMZ: 1. Randy Foye went to "Villanov-er" 2. J.J.'s last name is "Henson" 3. Today's recap headline, which was totally on-point and fits with the previous bullet point. What a sorry game of basketball.

- Raise your hand if you DIDN'T know that high-caroming Andre Miller three to end the first quarter was going to drop. Mmhmm.

- Good things tend to happen when Raymond Felton and J.R. Smith use picks to get into the paint. The former has been happening more since Felton returned on sturdier legs and the latter has been happening more since, I guess, someone told J.R. to make it happen more. A cool lineup of Felton, Smith, Shumpert, Melo, and Bargnani briefly spaced the floor and set screens so those two could drive, kick, and run the occasional pick-and-pop. They went on an 10-1 run in the second quarter.

- After sitting the whole first half, Pablo Prigioni played five second-half minutes, which is pretty outstandingly dumb to me. If Pablo Prigioni is healthy, then he should play because he is good. If Pablo Prigioni is not healthy, then he should not play because it would hurt him. Mike Woodson managed to offend both of those conditionals at once with that brief Pablo stint. In sending Pablo out for a bit, Woodson denied himself the only excuse for a bad rotational decision. That was just incompetent incompetence. A bad decision and bad marketing of the bad decision.

- Soon, I'd like to make a list of Knick trends that are actually somewhat positive. One of them will be Tim Hardaway Jr.'s play in transition. He is SO much fun to watch gliding up the floor and floating around the rim. He made an outstanding lefty finish through two people early in the second quarter. I liked when Hardaway made three consecutive solid rotations in the paint, which led to one good foul and two great blocks on two plays. I liked the two open threes he made, too. I liked a lot of what Timbaland was doing, and I liked when Mike Woodson brought Iman Shumpert back into the game for J.R. (who'd been struggling) instead of Hardaway (who'd been thriving) with just over eight minutes to go in the game. Of course, in the ensuing minute, Hardaway rushed a put-back attempt off a missed free throw and got shook by Andre Miller, so he got promptly subbed out for J.R. (who made a nice save and hit a three, but also went on to fart away or nearly fart away several crucial possessions with poor shot selection and zero control of his dribble). Woodson has some internal exchange rate (1 THJM = 6 JRM, or something) for punishing individual mistakes that I'll never understand.

- Amar'e Stoudemire only played 15 minutes in this one. He couldn't get some decent shots to drop. I was reminded of something I've noticed before, which is that Amar'e sometimes "boxes out" to avoid playing defense. Like, the guy goes possessions at a time without competing for a rebound, then all of a sudden, when someone's driving in his direction, he decides it's time to adhere to his own man instead of helping to wall off the rim, as if boxing out is only worth doing when it is the lesser of two evils. It's like making a dentist appointment when your in-laws are in town.

- Mike Woodson coached Friday night tieless. He probably just got honey mustard on his tie or something, but I like to imagine this is step one of Woodson's plan to demonstrate just how untouchable he is. Not only can he get away with illogical lineups and persistent refusal to correct mistakes, he can completely subvert basic coach decorum without repercussion. First it's no tie, then it'll be an open shirt, then no shirt, then eventually Woodson will just show up without clothes and spend the game doing nude somersaults along the sidelines.

- Several fourth-quarter possessions created wonderful open shots that just refused to drop, which is a familiar foible. The Knicks did get two late buckets off a simple but sweet drive-and-kick from J.R. to Felton, then a scary series of fumbles that led to a broken play and an open lane for a Shumpert lay-in. They did not get THE late bucket on the final possession when Melo faced up Randy Foye, let 15 seconds fall off the clock, then had his predictable contested two partially blocked. Airball, game over. (Foye hit his hand a bit. Doesn't matter to me.)

And there you have it. That's one kind of Knicks loss. They've had a few of these during this eight-game slide. They fall behind their opponent, then pull closer and closer until they're nearly even, then choke on the exhaust and fade at the last second. This could have been a blowout loss if the Nuggets set that three-step defensive breakdown in motion more often. It could have been a win if the Knicks made a few shots down the stretch. Instead, the game followed that asymptotic, maximally torturous path-- approaching a win without quite reaching it. This sucks.