The Knicks are still without Tyson Chandler and just had a truly Francis-worthy Sunday afternoon against the supposed-to-be-tanking Boston Celtics. After an encouraging Summer League, many fans, myself included, were excited to see the return of Jeremy Tyler, who could ostensibly help the Knicks' front line with his offensive rebounding, athleticism, and general tall- and healthiness. After three games back in a D-League uniform we're starting to get an idea of what Tyler is right now. Unfortunately, that still isn't anything resembling a defensive anchor and despite his solid scoring Tyler doesn't seem able to address the Knicks' biggest needs right now.

The Bayhawks played Friday against the Iowa Energy and Saturday night against the Canton Charge on a back-to-back. Tyler did a good job generating post offense against both teams and scored at least 20 points on both nights, but his defense is still very much a work in progress. Despite his great physical attributes, Tyler failed to record a block or a steal against either team. Terence Jennings is a better defender in large part because he seems to care more than Tyler about keeping the ball out of one's own basket. One big step for Jeremy Tyler to move closer to a spot in an NBA rotation will be to give more effort defensively.

Here is Jeremy Tyler defending against the Energy last Friday night. Nick Covington isn't the strongest defender and he has allowed Kalin Lucas to beat him off the dribble. Jeremy should slide over and force Lucas to make a decision. 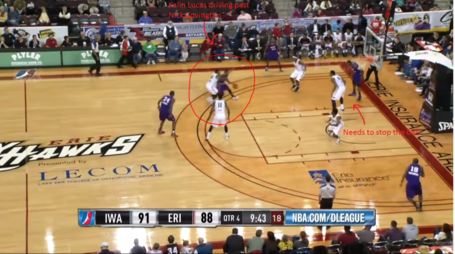 Tyler does not fully commit to the rotation and takes only one step into the paint. He does not contest the layup strong, and the 6'1" Kalin Lucas finishes over him. 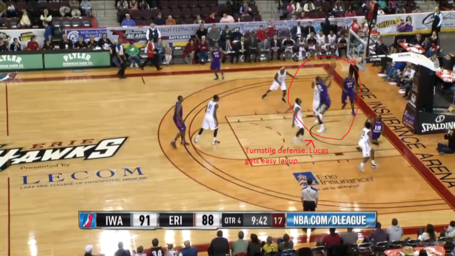 This was a poor defensive possession for Tyler, and it followed an even more egregious lack of effort. Here is the previous defensive stand for Erie. 6'10" Energy forward Augustus Gilchrist has gotten the step on CJ Leslie after a pump fake from the 3-point line. Leslie shouldn't have fallen for it, but he has and now Gilchrist is driving the lane. 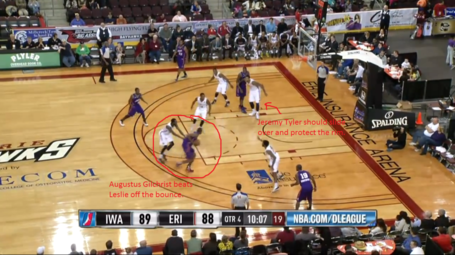 This shouldn't be too difficult for Tyler. The paint is wide open and Tyler can make a play at the rim to prevent the basket. Gilchrist isn't a great ball-handler or passer so his options should be limited if Tyler rotates correctly. 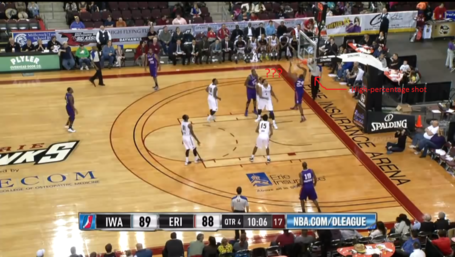 But Tyler does not. Instead of contesting Gilchrist's shot, Tyler stands transfixed as Augustus Gilchrist gets an easy two-hand dunk.

Tyler simply does not put enough pride into his work on the defensive end, and it is costing the BayHawks. Here is one more defensive play, this time against the Canton Charge on Saturday night. Remon Nelson enters the ball into Henry Sims (Hi, Henry!) 21 feet from the rim for what should have been a dribble-handoff back to Nelson. 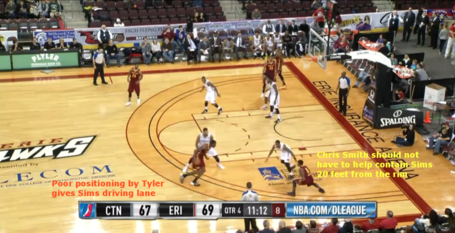 Tyler swipes at the ball and opens his stance a little too much, revealing a lane to the basket. Chris Smith could drop down and help off of Nelson, but Smith should not have to help Jeremy Tyler contain Henry Sims driving to the rim from that far out. Tyler is big, mobile, and athletic and should be able to stop the drive without giving up a possible open jumpshot from Nelson. However, poor positioning and a general listless effort from Tyler gives Sims the lane. 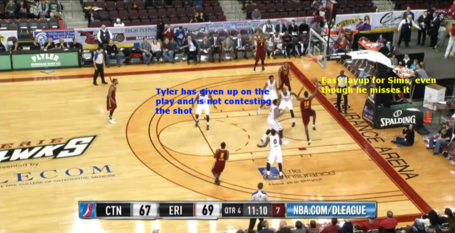 This is a very easy shot for a professional basketball player (and probably should have been a dunk), but Sims somehow blows the layup. Tyler is there and has the opportunity to salvage his mistake by collecting the defensive board, but... 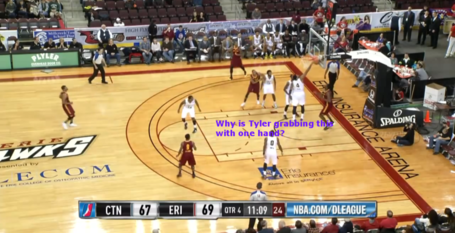 Tyler inexplicably goes up for the easy rebound with one hand, even though Sims is still standing right next to the basket! The ball slips out of Tyler's hands a bit and Sims snatches it away and scores immediately on the put-back. A tie game early in the 4th quarter started to slip away after multiple defensive errors from Tyler. The Bayhawks actually still had a chance to win the game in the final minute, but with a two point deficit and less than 30 seconds remaining Tyler fails to box out Arinze Onuaku after a missed free throw and is forced to foul Onuaku, who made both free throws to build the Canton lead to 4 with 20 seconds to go. Jeremy Tyler has been foul-prone, lazy on the defensive glass, and reluctant to offer sufficient help on defense, and it's part of the reason the Bayhawks have struggled so much to start the '13-'14 season.

Chris Smith had another disappointing outing against the Iowa Energy, but bounced back against the Charge. At this point, Smith has established himself as the best defensive guard for the Bayhawks. He denies penetration consistently and works hard to beat his man to the spot. At 6'2" and nearly 200 pounds Smith has the frame to defend either guard position sufficiently in the D-League. He continues to rebound well, but hasn't shown any development as a playmaker or as a shooter. He'll need to make himself a greater threat on the offensive end to merit a call-up.

Important story: At one point against Canton, the Charge had become frustrated after CJ Leslie sliced through their defense repeatedly for layups. Assistant coach James Posey of the Charge received a technical foul after some aggressive words in the general direction of the court and all five players for Canton seemed distracted as Chris Smith dribbled up the court. Seeing no apparent defensive attention at the 3-point line, Smith pulled up and canned a three with his foot on the line and did the "Three to the Head" celebration we used to know and love. It was ultimately ruled a long two because his foot was on the line, but for a moment my affection levels for Chris Smith had reached 9000.

CJ had a great night against the Energy. He rarely looked flustered on offense and simply picked his spots well, scoring an efficient 22 points on only 13 shots. Three of his eight rebounds came on the offensive glass and he played excellent defense for most of the night, finishing with a pair of steals and five blocks. It's very encouraging to see Leslie play so well after a very subpar Summer League. Many on P&T had written Leslie off back then, but he's recently played more like the five-star prospect he was coming out of high school.

Leslie had a less sterling night against the Canton Charge but still finished with 17 points on 12 shots, five boards, and two assists. He had a few bad turnovers, including one where he dribbled off his own foot attempting a spin move while bringing the ball up the floor, but it was still a respectable night overall. Don't let Leslie's low steal and block totals this game fool you: His defense against Canton was as good as or better than against Iowa. CJ played fantastic help defense, routinely ducking into the lane and sacrificing his body to draw charges or contest shots. He found himself defending Charge wings regularly but did a great job forcing them baseline, where Carrick Felix and Kevin Jones were forced into turnovers out-of-bounds. It wasn't aggressive, physical defense; Leslie just showed good basketball IQ and made it difficult for the Charge to score in his area. Good work, CJ.

Other Things of Note:

- Lots of technical difficulties here at home in Erie. Scoreboard troubles, radio dropping in and out, etc.

- I'm not sure how to spell Terrence Jennings. I've seen it written both ways: "Terrance" on the Bayhawks telecast but "Terrence" on the Bayhawks website. (UPDATE: I have been notified that both are incorrect and his name is actually spelled Terence. 'Lo, Terence!)

- Jeremy Tyler has been a force on the offensive end when he gets good post position. Few D-League big men can consistently stop him when he establishes position. If he goes one-on-one against most opponents you can almost chalk up the score to Tyler. He been less reliable when shown double-teams, however, and that's part of the reason his turnover count is so high. This is not a good reaction to an Iowa double-team:

And that was this week in Erie. Some great play from CJ Leslie, some mixed play from Jeremy Tyler and Chris Smith, and a Henry Sims sighting. See you guys next week!