After missing Friday night's contest with "team-related issues," Chris Smith returned Saturday and erupted in a loss to the Canton Charge.

Share All sharing options for: This Week in Erie: Chris Smith's Scoring Explosion

Chris Smith just got called up by the Knicks. He is a real Knick again, and he might actually get some minutes. Here is Paul Chillsap's latest update on what Smith has been doing in Erie. -Seth

"We see him as a player we want to develop and see potential in."

That was Knicks' executive Allan Houston on the signing of Chris Smith. Since his debut for the Erie BayHawks this season, Smith has largely shown his talent as a defender and an energy guard. His rebounding and willingness to deny penetration have been impressive, but Smith hasn't shown much in the way of prolific scoring. After a solid 15 point night against the Charge in Erie, Smith torched Canton at home to the tune of 28 points on 16 shots. While it's unlikely that Smith emerges as a reliable 20 point scorer, the confidence he's building on that end could earn him a call-up from the Knicks given his defensive ability. Let's look at what Smith did to make himself an offensive weapon Saturday night.

Chris Smith's first basket came on a smart backdoor cut against Charge guard Antoine Agudio. As Clyde Frazier is wont to say on Knicks' broadcasts: Keep an eye on the ball and your man. Agudio is overplaying Smith, and seems preoccupied watching CJ Leslie dribble the ball at the 3-point arc. 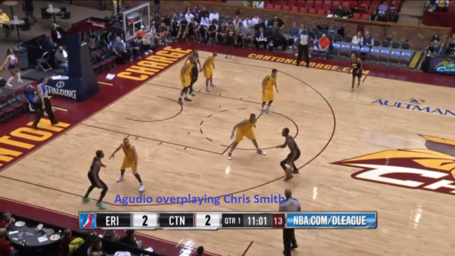 Smith recognizes Agudio's lax attention to his man, and makes the smart play by cutting backdoor. Leslie delivers a perfect bounce pass and Smith gets a good look at the rim. However, the play isn't finished. Arinze Onuaku, the 275 pound Charge center, will slide over and contest Smith's layup. Fortunately, Chris does a great job adjusting in midair and finishes the shot over the outstretched arms of Onuaku. 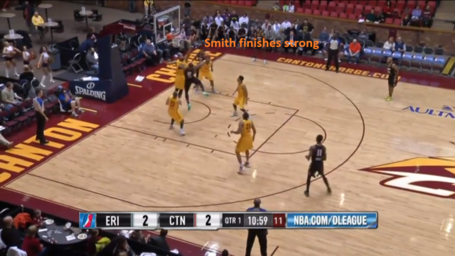 Getting relatively easy baskets like that one inside would be key for getting Smith going on the offensive end every night. These shots don't need to be created off the dribble and are high-percentage looks. Smith wasn't limited to shots around the rim all night, though. Here he is driving on Agudio after catching the ball at the right elbow. Smith dribbles across the free throw line to the center of the floor and then shows excellent fundamentals creating a more open jumpshot. 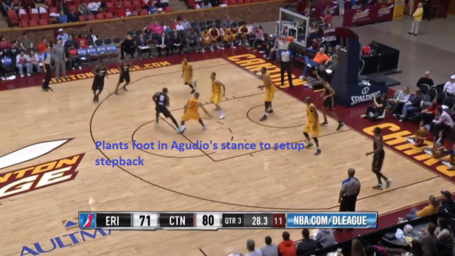 This move was particularly Smith-y. Agudio expects Chris to either attack the rim or drop the ball off to a teammate and is doing a great job keeping Smith out of the paint. Smith answers by planting his feet directly in Agudio's stance and stepping back for the jumpshot. His footwork makes it difficult for Agudio to recover and fully contest the shot. 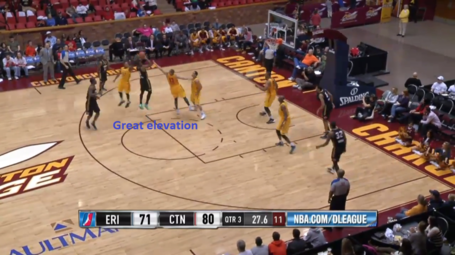 Agudio does get a hand up, but Smith gets fantastic elevation on this shot and knocks it down before Agudio can close out. This isn't a shot you necessarily want to rely on as a team, but it's a difficult one to counter if executed correctly. Chris Smith seems to be making progress with his jumpshot, though he's not a reliable shooter quite yet. It was encouraging to see him attempt these shots with such confidence, as he'll need some kind of perimeter game to open up his driving and passing. 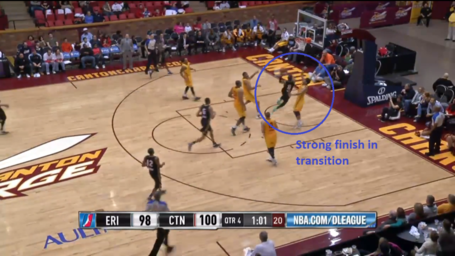 Smith mixed up his scoring all night, but most of it came on strong finishes in transition like this one. Chris Smith and Lewis Jackson terrorized the Charge by leaking out on the break all night. Smith froze the Charge's Jorge Gutierrez with a hesitation at the free throw line then drove straight to the rim and into the body of Gutierrez. The 6'2" 200 pound Smith sheds contact at the rim and finishes the layup to tie the game with a minute remaining. Smith sometimes settles for jumpshots or floaters in the lane due to his average athleticism, but he would benefit from using his strength to just power through contact more often.

Perhaps the most surprising aspect of his game tonight was the three made 3s on five attempts. Smith looked uncomfortable shooting from deep during Summer League, but shot them with confidence tonight and saw results. None of his shots were bigger than his final made three to tie the game again with 30 seconds remaining.

CJ Aiken is there to screen Agudio after the handoff, but Smith takes the open three and nails it. Unfortunately his effort was in vain: Canton went on to win 104-106 after a missed free throw and a Jackson turnover. Still, it's nice to see Smith shooting it well and hopefully he can continue to be a threat from the arc.

CJ Leslie had a decent couple of nights against the Charge when he was on the floor. The raw numbers might not look that impressive, but consider the limited minutes and his production looks a little stronger. He looks much more comfortable acting as a supplementary scorer now, compared to his showing at Summer League. Leslie is creating some off the bounce in the halfcourt, but does most of his damage in transition. He's a complete mismatch for anyone trying to guard him with a head of steam: Guards struggle to contest his length at the rim and forwards are easily dispatched with his crossover. He hit a couple pick-and-pop jumpers and drew a few fouls operating out of the high post. Just solid, efficient scoring overall.

Leslie wasn't as consistent on the defensive end this week. He gave up good post position to Arinze Onuaku a few times and wasn't always timely with the rotations, but is still a versatile defender capable of guarding anyone in the NBADL. His limited minutes and the interior dominance of Onuaku made it difficult to see Leslie's defensive impact, but he looked decent when he was out there.

Jeremy Tyler did not play either night against Canton due to what Coach Cross labeled a "team-related issue."

Other Things of Note

-As stated above, both Chris Smith and Jeremy Tyler missed Friday night's contest with a team-related issue. Smith returned to start on Saturday, but Tyler did not play. Terence Jennings started in his place.

-Speaking of which: The BayHawks might have been able to use Jeremy Tyler against Arinze Onuaku, who demolished Jennings and CJ Aiken in his place. Onuaku had a perfect night on Friday, scoring 29 points on 11-11 from the field along with 9 rebounds and 3 blocks. He followed that up by scoring 25 points on 13 shots the following night. He was just unstoppable. The officials gave Onuaku an extremely generous whistle, especially against Jennings, but yeah.

-Classic broadcasting moment here in the first quarter: "5 seconds on the clock. Ricky Davis: He knows what to do in these situations!" Ricky immediately travels. "......"

-Speaking of Ricky, he had a very Ricky time down the stretch on Saturday night. After hearing some particularly loud jeers from Canton fans while at the free throw line, Ricky Davis started jawing back at them. At the free throw line. He made the free throw, of course. Ricky then came down the floor and started drilling consecutive jump shots, glaring at the fans on the sidelines the whole time. Sweg.

-Friday night was Zombie Night in the Canton Memorial Civic Center. The dancers all wore makeup and did the Thriller dance at halftime.

And that was this week in Erie. The three bros didn't play much, but when they did they were pretty good. The BayHawks still haven't won a game. Hopefully that changes soon! Just a reminder: You guys can watch the BayHawks live on Youtube on the NBA D-League account. You can also watch archives of the games afterwards. It's all very cool. See you next week!