You don't just stroll into Milwaukee expecting an easy win. The Bucks are 2-0 at the Bradley Center and 5-0 overall in games they didn't lose. You're gonna have to fight through some adversity if you want to leave "The House Khris Built" victorious. Adversity like:

- Never ever guarding Brandon Knight over picks so he can put up a career high 36 points on 25 shots and six made 6-12 shooting from downtown. Just not guarding him sometimes at all, pick or not. FARTDOG FARTDOG FARTDOG.

- Never ever boxing anyone out ever seriously John Henson if you need a boost just holler and we can interlace our fingers to give you a lift to the rim.

- Carmelo Anthony reverting to his iso-est self and just forcing bullshit against pretty decent Milwaukee defenders.

- Iman Shumpert staying ice cold from the field (0-5) and out-of-control off the dribble, Tim Hardaway Jr. sitting through most of the game's crucial stretches despite being the only competent offensive wing on the team for like weeks now, and J.R. Smith taking a Knick record 17 three-pointers and missing 12 of them. That's 19 points on 23 shots, SEVENTEEN of which were threes, for J.R.

- Mike Woodson calling scores of unnecessary if not outright momentum-killing timeouts, perhaps out of spite because everyone ragged on him for failing to use one late against the Wizards. Like, I'm surprised the game didn't end on Woodson calling a timeout moments before the Knicks hit a buzzer-beater.

- Letting Henson get a wide-open look at a last-second game-winner, but going to overtime when he missed and Khris Middleton missed on the offensive rebound.

- The game clock at the Bradley Center just stopping during overtime, perhaps because the person running it electrocuted himself on purpose.

- Melo blowing a two-for-one, then bricking an awful jumper with less than a shot clock to go in overtime, but the Knicks getting the rebound up 2, but Andrea Bargnani pulling a quick three-pointer instead of waiting for a Bucks foul 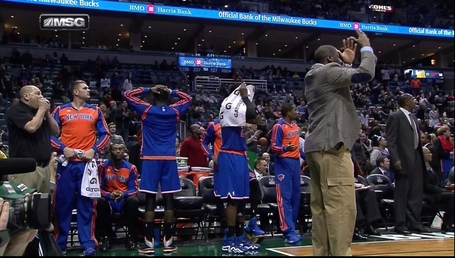 - Melo, who everyone agrees has played too many minutes in the season's first month and a half, playing 55 minutes. Tyson Chandler, playing his first game since breaking his leg and visibly struggling through cramps by the end of it, playing 37 minutes. And J.R., working through a sore knee and performing like corn-flecked baby shit, playing 48 minutes while-- again-- Hardaway bided his time on the bench.

- Giving Henson yet another tip-in with tenths of a second left to send the game into the second OT.

These are the kinds of challenges you face against the Bucks. But the Knicks pulled one out in double overtime because they are the Knicks and they don't back down from adversity. You did it, guys. You did it, Woodson. Hold your heads high, Knicks.