Mike Woodson, B.F. Skinner, and the breaking of the Knicks

We're all rats in Woodson's maze.

Share All sharing options for: Mike Woodson, B.F. Skinner, and the breaking of the Knicks

Mike Woodson is breaking my brain.

I don't mean that the coach of the New York Knicks is destroying the team's chances to win (though he is) or that he's crushing my will to watch this team (though he is).  Woodson's impact has gone way beyond that. The man is rerouting the very synapses in my brain, firing them off in all kinds of crazy directions, altering (perhaps forever) my very perception of basketball.

Let me provide an example. There is a young gentleman who plays for the Knickerbockers. His name is Tim Hardaway Jr. Good kid, likes to shoot the basketball. I've taken a liking to young Timothy. He makes a high percentage of his shots -- which I hear can be a useful attribute in the NBA. He finishes on the fast break with a little something I like to call "competence" -- no small feat, considering he plays for perhaps the worst fast-break team in the history of mankind.

Most importantly, Hardaway is one of five Knicks (along with Pablo Prigioni, Kenyon Martin, Carmelo Anthony and Tyson Chandler) who sport a higher O-rating than D-rating, meaning the Knicks score more points than they allow with Hardaway on the court. Considering the team he plays for, that fact is astonishing. The kid is alright by me.

Now, Hardaway isn't a good defender. He frequently makes mistakes, as rookies tend to do. But is he an especially bad defender, on this Knicks' team? No. Statistically speaking, his good offense has outweighed his bad defense ... and any current Knick whose strength outweighs his weakness is a precious commodity.

Yet I watch Hardaway play with a considerable sense of trepidation. Every time he blows a defensive assignment or takes a bad shot, I cringe. I hold my breath. It doesn't matter if the Knicks are up 15 (rare) or down 15 (less rare), the reaction is the same: abject fear.

Honestly, I feel no such discomfort with any Knicks player of more than three years' experience. When Raymond Felton allows an opposing point guard to blow by him, when J.R. Smith takes another step-back three (or 17 step-back threes), I either smile or rage. There's no fear, no whipped-puppy hesitation -- that only happens when one of the young'uns make a mistake.

That is the Mike Woodson effect. It has already broken the will of Iman Shumpert, a player so confident he averaged 11.1 field goal attempts in the first month of his rookie season. Now in his third year, he is averaging 5.8 field goal attempts this month, and looks like a quivering mass of indecision whenever the ball is passed to him. He is broken; I am broken.

Fortunately, I am no stranger to subject of Psychology. I took a Psych class in 2003, and I saw 20 minutes of that movie where Michael Fassbender plays Carl Jung and spanks Keira Knightley for some reason (not gonna lie, Michael Fassbender is a sexy man). So come and join me as I discover just how exactly Mike Woodson destroyed my brain.

The behaviorist B.F. Skinner pioneered Reinforcement Theory (or operant conditioning) as a way of explaining how human beings are motivated. Here is an overview of the subject from Psych department of Penn State University. It's a bit dry and science-y for my taste, but there are two important segments which apply directly to the Woodson method.

This is reprimanding someone for bad behavior, with the intent of lessening or eliminating that bad behavior. In Woodson's case, the death stare, timeout scream-fest and public post-game blame-laying are his preferred means of positive punishment.

However, there is a catch.

Ah yes, screaming and staring at players for making mistakes on defense doesn't necessarily help them learn how to play good defense. And "passivity, fear, anxiety and hostility" might as well be called the Shumpert cocktail at this point.

This is the removal of a pleasurable stimulus -- in Woodson's case, usually playing time. He tried it once with J.R. Smith, in the fourth quarter of the December 14 game against the Hawks. Then he stopped doing it. Odd.

Woodson seems good at this one. He swiftly removed Shumpert after fouling Paul George at the end of regulation, even though he had shown he was the only player who could guard George. And Woody sure couldn't wait to get into the press conference room and blame Shumpert after that game. That's swift, decisive action, right?

Punishment must be doled out consistently between employees and also within individuals...If punishments are not consistent, rules will lose impact, there may be a decline in morale, and employees may question the competence of the dispenser of the punishment.

That last sentence pretty much doubles as the epitaph of the Mike Woodson era. It would take a month to list all the examples of Woodson's inconsistencies in doling out punishment. Instead, enjoy these fancy science charts.

Here is how a responsible coach should punish his players. 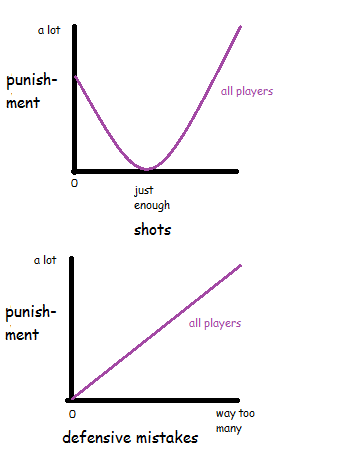 Every player has to shoot on occasion -- even the most offensively inept big shouldn't pass up an uncontested two-footer. The trick for coaches is to find each player's optimal shot output, and adjust your punishments accordingly.

Now here is the Woodson method. 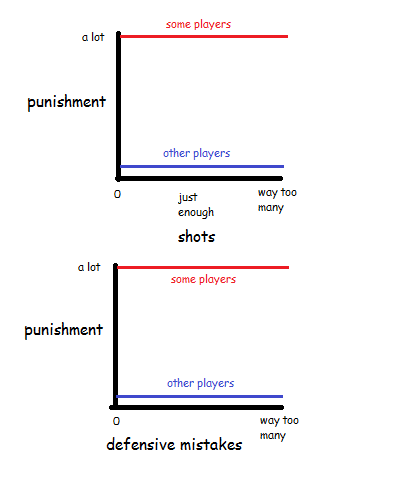 But trust me give me that chance again I'll shoot it again!

I'll let Seth field this one.

Well, *I* can't, but you actually can! RT @HerringWSJ: Woodson, on Bargnani's open looks: "You can't tell him to stop shooting."

4. Punish in private, praise in public

Resist Mike Woodson's machinations! Resist, while you still can!