We've all seen basketball; we know how to process it, how to judge it. But what of these strange happenings, these events that occasionally find their way onto the MSG Network? Are these athletes, or amateur street magicians?

The Knicks cannot be "enjoyed" by their fans in the conventional way. The wins are tragic and the losses are farcical...or perhaps it is the other way around. A 2013-14 Knicks game is something you watch with your drunken buddies in a back alley in Tijuana -- after it's finished you can never make eye contact with any of those people ever again.

In just a shade under two months, Knicks fans have been reduced from "You're not seriously considering playing Chris Smith, are you?" to "Please put in Chris Smith, I just want to feel something!"

It won't be easy. Film critic Vince Mancini has a theory about movie trailers -- you can tell a lot about how bad a film is going to be by the number of nut shots featured in the trailer. Anyone who has seen an Adam Sandler movie over the last half-decade or so knows what he's talking about.

Now keep in mind: the Knicks have featured two nut shots in their past two games. Andrea Bargnani was smacked in the plums by a basketball tossed back into play during the fourth quarter of Friday's loss and a prone Toure' Murry punched Kyle Lowry in the testes to salt away Sautrday's loss.

These nut shots are the Knicks. The Knicks are Adam Sandler. It all fits!

With that in mind, I have a few humble proposals designed to make the Knicks a bit less unbearble.

Forty-eight hours ago, I was firmly on the "fire Woodson" bandwagon; now, I just can't bring myself to part with the man. He's just too damn valuable.

I don't mean Woodson the coach -- that guy should have been fired weeks ago. I'm referring to Woodson the quote-master. Woodson's pregame and postgame quotes have become the highlights of each Knicks game.

Woodson: "At this stage right now, I'm about playing the guys who are gonna play hard."

At this point? You're making that decision now, in game 30 of a 9-21 season? It's your world, Woody! I'm just a squirrel trying to get a nut!

Or this gem, from before Friday's loss.

Also, Woodson says team could go with a huge lineup -- Kenyon Martin at the 3, Bargs at 4, Tyson at 5 -- if Shumpert can't play tonight.

Woody's Left Nipple: People keep saying we had success last year with the two-PG lineups. Is that true? As a nipple, I lack to capacity for memory.

Woody's Right Nipple: What? I can't hear anything you're saying. I don't have ears; I'm a nipple, bro! Let's just play STAT and Bargs together.

Since the Knicks love reassigning people anyway, and since they more resemble a tin-pot Communist dictatorship than a professional basketball organization, why not simply move Woodson to a position better suited to his talents?

Comrades, I give you: Mike Woodson, Minister of Knicks Propaganda. 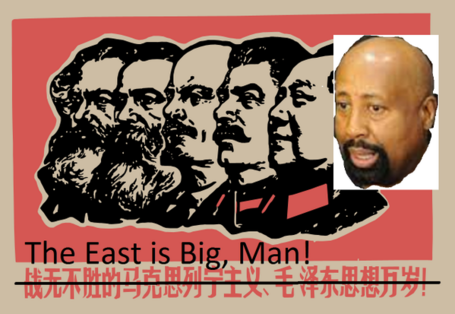 The Knicks will obviously need an interim head coach, but who to choose? Herb Williams would be the safe choice, but the charisma of Jim Todd cannot be denied -- women want him, men want to be him.

Why should the Knicks have to choose? Instead, I propose using science to meld the two assistants into a kind of coaching Voltron. HerboTodd will combine the strengths of both men -- Herb's experience, length, and patented scorpion technique; Todd's impeccable mustache, accent and ability to talk to animals -- into an interim super-coach!

3. Get a Fatter Point Guard

Felton fat is the kind of fat that, say, causes him lower-body injuries and limits his lateral mobility to the point of being perhaps the worst defensive point guard in the league. But it's not the kind of fat that makes you think, Is somebody shooting another Martin-Lawrence-in-a-fat-suit movie?

That is the kind of fat guy I want playing point guard for the Knicks. And we don't have to look far to find one. We can simply call our old buddy Mike Sweetney. Sweetney isn't technically a point guard, but the Knicks haven't seemed very interested in playing technical point guards this season. I say go fat or go home.

As an added bonus, Sweetney is listed at 6'8, according to Basketball Reference. What better player to run point for that fantasy Martin-Bargs-Chandler frontcourt! I don't have to remind you people how big the East is.

With Woodson running the P.R. campaign, HerboTodd drawing up the plays, and Sweetney sweating so much that the mops have to come out during play, the Knicks will not win more games. But this team has evolved beyond the need for tedious concepts like "winning" or "losing." The Knicks are not about competition. They are a backwoods carnival attractions, of a sort, and all they want is to charge us two bits a gander.

All they need is a little cosmetic work to achieve their true potential.