What do these two match-ups have to do with yaks? If you have to ask, you'll never know

The All-Star break coincided rather nicely with the Chinese New Year holiday (thanks again, Lunar Calendar and Mr. Stern), so I was able to spend a refreshing few days away from the Knicks in sunny Yunnan province (photos here.)

On a mountainside just outside of Dali's old city I found many guides asking me to rent their horses. "No thanks," I said.

Then I caught a glimpse of this fine yak - a certified bargain at only five yuan a ride. Forget horseback riding. Like the old saying goes: once you go yak, you won't go back.

Here's hoping the Knicks, losers of three of their past four, have worked out the kinks and are ready to dominate this little two-game road trip.

ON, YAK, TO THE PREVIEWS! HYAH!

Ooooh baby, what better way to start the second half than with a trip to Indy.

I mention in my last Pacers preview that, while it's still easy to hate the Pacers as an organization, the actual guys who play for the team are a tough lot to hate. Knicks fans of a certain age (lets say over 10) will always hate the Pacers as an entity. My God, what a perfect foil they were for the Knicks - it doesn't get any better than New York vs. Indiana in basketball.

Indiana inspires thoughts of what some would call "real America": unpaved backyard basketball courts, all that Hooiser bullshit, "God made a farmer", and of course, Larry Bird. Larry's son, Connor Bird, was recently arrested for trying to run his girl over with his car...and I'm sure it wasn't some fancy-pants foreign car or a hybrid, but a real American machine, possibly a Dodge Ram. And he was also busted for marijuana possession...way to support America's farmers! New York, on the other hand, is...well, it's just New York. Every time my wife and I visit one of Asia's mega-cities, I infuriate her with my casual, "eh, it's not New York" attitude. Y'all know what I mean.

All of this made me a little depressed when I discovered just how likeable this Pacers roster could be. Gone are the Reggie Millers, with their choke-motions and leg kicks, or even Rik Smits, with his Rik Smittiness. They're a young, scrappy, homegrown group; the kind of basketball team every fan should appreciate, or so I'm told.

Still, as I anticipate a two-month "Race for Second Place" between these two teams, I find myself all turned around on the subject: I can totally see myself hating these guys, if only for their sheer likability. Looking forward to a possible Knicks-Pacers playoff series, you just know the country will fawn over these boys, in contrast to the overpaid mercenaries from New York. And let me tell you, nothing inspires New York fans quite like the collective hatred of the rest of the country. I say bring it on, America! My name is Joe Flynn; I like the Knicks and I hate the Pacers. I hate Paul George, George Hill...I hate every George except George Washington, George Clinton, and my cat, George Kitten. 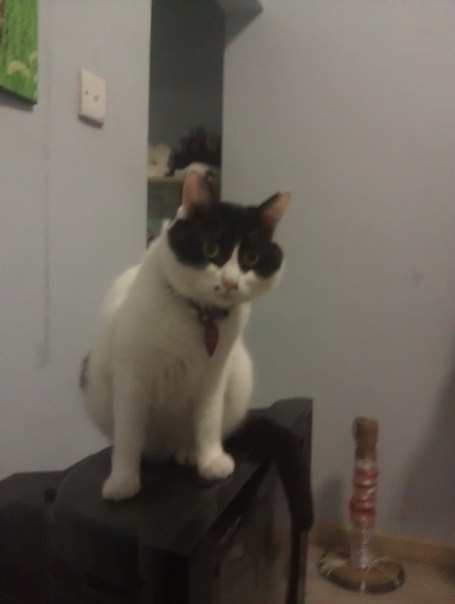 Those Knicks fans who have soured on this team (and it seems like there are more of them popping up every day) will have a hard time believing the Knicks can hang with the rugged, defensive-minded Pacers (still 1st overall in defensive efficiency). This, of course, is absurd...even if you try to dismiss the Knicks' win in November (and many fans seem willing to dismiss every win this team had in November), the Melo-less, Felton-less Knicks nearly beat the Pacers just last month. This "soft-ass" Knick team handled the Pacers on the boards, 51-48 (Steve Novak had five boards in that game, I shit you not). They took a small lead into the fourth quarter on the strength of a 7-point third-quarter ending swing the lineup of Chandler, J.R., Novak, Prigioni and Kurt Thomas (???).

How did the Knicks lose the lead? Two words: Tyler Hansbrough. History will record that Hansbrough shot 1-for-8, scored 6 points and grabbed 4 rebounds, but when he was brought in to start that 4th quarter, something changed. By the time he checked out, midway through the fourth, a two-point Knicks lead had transformed into a seven-point Pacers lead. Hansbrough is a true OSKA, and true OSKAs can beat the Knicks with more than just shooting and passing and rebounding. It's their aura - that goofy white aura that they wield much in the same way a Jedi knight wields the Force - affecting the flight of the ball, waving a hand in Tyson Chandler's face, saying "You don't need to block out. These are not the rebounds you're looking for."

Despite the Pacers' defense and Hansbrogh's juju, I feel the Knicks should win this game. They match up well with this team. Forget Melo and Felton for a second - if they can get a better game from Amar'e Stoudmire (4-for-11 in the last meeting) and force some turnovers (only 10 turnovers for the Pacers last time, despite the fact that they are 21st in the league in TOV%), they will win. This will be the biggest game Eastern Conference road game the Knicks will play until the end of March. Get it done, boys!

Boy, all that hating on the Pacers sure got me thirsty. After our yak ride, the wife and I drank some Tibetan yak butter tea. It wasn't great, but wasn't terrible. I certainly didn't appreciate the aftertaste...or the price. Fifty-five yuan? Damn, those Tibetan yak farmers must be raking in the dough, living in mansions and drinking their own yak butter tea out of fancy silver goblets. 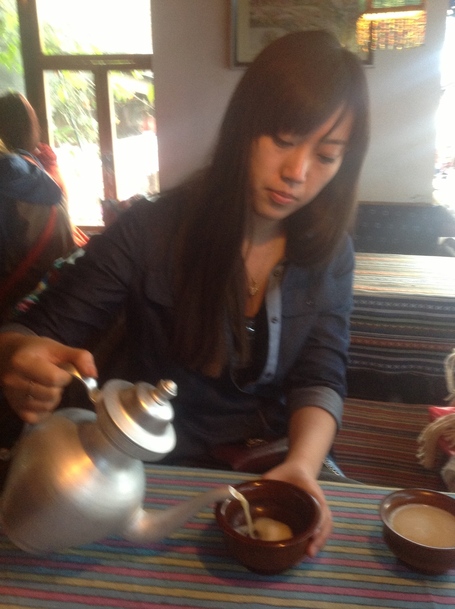 Does anybody else find it odd that the Knicks have played more regular season games in England than they have in Canada at this point in the season?

I must admit, I didn't watch the last game. I was on a bus running through the middle of Yunnan, near a place called Dinosaur Valley. For those of you who have taken I-95 through the Carolinas, the perfect analogy for Dinosaur Valley would be South of the Border, the Graceland of South Carolina truck stops. Every few miles, a new billboard would herald something to the effect of "In the North they have the Terra-cotta Soldiers; in the South we have Dinosaur Valley!" As we traveled through the valley, the houses along the highway - crude cinder-block farms surrounded by brick-red earth, parched and cracked from years of drought - were painted with adorable murals of dinosaurs. They had mama and baby brontosaurs, tyrannosaurs, pterodactyls - the whole shebang. It was amusing and depressing in equal measure.

As the bus stopped at a rest area in the Dinosaur Valley, I checked NBA.com on my phone. Sadly, the signal wasn't good enough to get American NBA.com, so I had to settle for the Chinese version.

Goddamn, the Knicks are going into the All-Star Break like a bunch of losers. What happened?

I checked the Raptors box score, hoping to figure out who had sent the Knicks into the All-Star break on such a down note:

And then a name down toward the bottom of the box score caught my eye:

Since that moment, his legend has grown in my mind. I B'Reffed him when I got home - here are his stats, the guy's top 4 scoring games have all come in the past two months or so - but I still don't what he looks like. As far as I'm concerned, Alan Anderson is the Keyser Soze of the Atlantic Division. Some people don't believe in God, but they fear Him; well I believe in God, and I fear Alan Anderson.

The question now is this: what kind of damage will this basketball leprechaun inflict during Friday Night Knicks. I don't want to alarm you, but the Knicks have somehow managed to win their last two games on Friday Night. A FNK threepeat doesn't seem possible, does it? And now we're adding Alan Anderson to the mix. The only hope is that Canada uses a different calendar than we do - perhaps a calendar based on the moon or Gordie Howe's birthday - and that it won't actually be Friday Night in Toronto. DON'T TELL ME THAT CANADIANS USE THE SAME CALENDARS WE DO!

Last week's loss was also notable because Carmelo Anthony had one of those "I'm hurt, so I need to keep shooting" experiences. Between him, Ray Felton and J.R. Smith, I do believe the Knicks lead the league in instances of the Injured Shooters Paradox. Melo says you need to be a shooter to understand. Sorry, Melo, but I'm not a shooter and I don't understand.

The Raptors game was only the third time this season Melo scored less than 20 points...and the first time the Knicks actually lost such a game. I hope people, especially Melo, don't look at this game and think "Melo needs to score more for the Knicks to win." That is simply not the case. There is no correlation whatsoever between Melo's point totals and Knicks wins. Check it:

Now, I'm not trying to say that Melo is overrated - he isn't. He has been the most valuable player of the current two seed in the East precisely because he seemed to realize that he can help the team win in any number of ways besides scoring. But for a shooter like Melo, old habits die hard. We'll see how he responds to his most embarrassing non-KG-related incident of the season. Let's hope his shot is on, or, if it isn't, that he can calm down, run the ball through him and continue disrupting opposing defenses like few NBA forwards are capable. It's not too much to ask.