Joe officially quits the Knicks, chooses instead to focus his preview on a team that will be playing - coincidentally enough - the Knicks.

I'll be making this a relatively brief Middle Kingdom Preview - I'm still suffering the effects of a rather nasty stomach infection. Let me start this article by offering a word of advice: if you ever find yourself in Kunming, under a bridge near the zoo, and some Chinese Muslims offer you kebabs from their sidewalk barbecue...by all means, eat those kebabs! They're delicious!

Anyway, what's the point of these articles? The Knicks are finished. In the span of 72 hours they were blown out by the Pacers, failed to trade their entire roster for the Spurs entire roster at the deadline (What the hell, Gruns?), and then lost to Rudy Gay and his abnormal hairline in Toronto. These are desperate times in the Knickerbocker trading post of New Amsterdam, and there can be only one solution: KURT THOMAS MUST SHOOT ALL THE THREES!

Or maybe we should just face that fact that no amount of Kurt Thomas threes can save this team. As for me, I'm ready to give up on this team altogether. Sure, I've lived through nearly twenty years of Dolan, the Isiah era, one playoff win in a decade...but a four-game losing streak? Intolerable. Only third place in the Eastern Conference? Fuck that noise! It's time for me to say goodbye to the Knicks forever, and pick up a new team.

But which team should I choose? How about a squad with an exciting young point guard, like Jrue Holliday? Sounds wonderful. How about a team headlined by Andrew Bynum, a guy who has yet to play a minute, and whose nonchalant attitude toward work, L.A. roots, and penchant for bowling have made him the NBA's answer to Jeffrey "The Dude" Lebowski? Now we're talking!

Is this writer a Lebowski fan? I dunno, let's ask this photo from Halloween 2006: 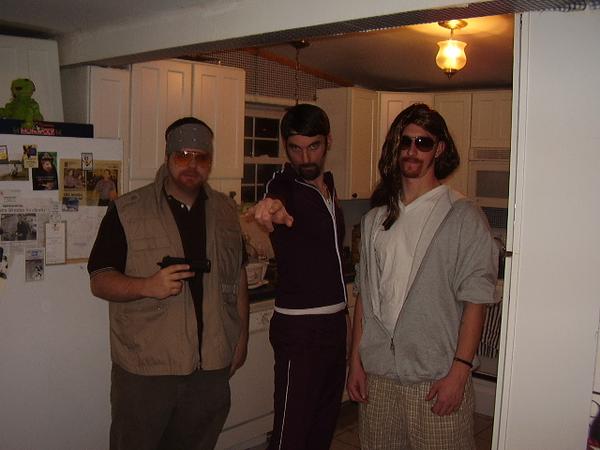 Well that settles it: I'm now officially a lifelong Sixers fan. Charles Barkley for Jeff Hornacek - what was up with that, am I right? And since this is now a 76ers Middle Kingdom Preview, let's start off by previewing their Sunday night match-up:

OH COME ON! You gotta be kidding me! The Knicks again? What are the odds?

Okay, I'll play ball. Our boys in blue (Or red? Which colors do the Sixers wear?) stomped the hated Knicks last month, 97-80. The story of the game, besides the Knicks sucking, was our man Jrue, who scored at will against the notoriously crappy Knicks perimeter defense to the tune of 35 points.

But was Jrue truly the key to the game? After all, he similarly torched the Knicks for 27 points in November - but the Knicks won that game handily, 100-84. The difference in those two games was the performance of the other Sixers guards, namely Nick Young and Evan Turner. In their first meeting, Turner turned in a fairly hollow double-double (11 points, 11 rebounds, 2-9 shooting) and Nick Young shot a Nick-Youngian 2-for-10 and kneecapped his team with a plus-minus of -29. Fast forward to January 26: Young and Turner both notched 20 points as part of a starting lineup that absolutely mauled the Knicks, especially to open the second half. If the Knicks want to change the result, they might consider focusing on stopping the Sixers' less-explosive, but still-dangerous wings. But why would we want that? We hate the Knicks, right?

The bad news for the Sixers is that Thaddeus Young is still out. That might be good news for Knicks fans...but if you're a Knicks fan, then why the hell are you reading this article? Nevertheless, the Sixers can afford to take this Knicks team lightly. The largest margin of victory in this rivalry was 62 points - a 162-100 win by the then-Syracuse National on Christmas Day, 1960. I expect this Sixers team to add at least 10 points to that record: 152-80 doesn't seem out of the question here. Go Sixers!

...or, the Knicks could win. They've done that this year, on occasion.