Video: J.R. Smith air-balls a free throw, gets frozen out by children

Share All sharing options for: Video: J.R. Smith air-balls a free throw, gets frozen out by children

A blowout win brings out the very best-- or at least very J.R. Smithiest, the Earliest if you will-- in our friend J.R. Smith. J.R. launched thirteen three-pointers last night, making it the third consecutive game in which he'd attempted at least that many. He gunned for flashy assists, whipping ill-advised passes into traffic. J.R.'s real highlights, though, came with the clock stopped.

1. With 11:06 remaining in the first half and the Knicks already up big, J.R. drew a shooting foul and stepped to the free throw line. J.R.'s a good free throw shooter-- almost 80 percent-- but when he's feeling silly, anything's possible:

You know the Knicks are playing well and people generally love J.R. when almost everyone at Madison Square Garden cheers an air-balled free throw. I say almost everyone because: 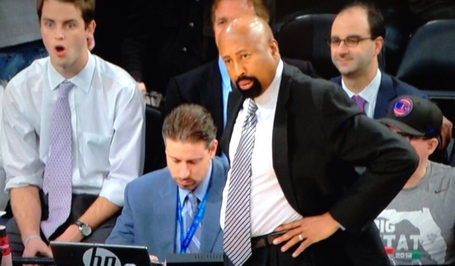 19,000+ people found J.R.'s air-ball amusing. Mike Woodson and Purpletie Broman were dismayed. It should also be noted that, on the next possession, Andre Drummond shot an even worse free throw off the bottom right corner of the backboard.

2. J.R.'s greatest moment was yet to come. The halftime show was the familiar gaggle of children-with-well-connected-parents-or-something-how-do-they-get-to-do-that playing full-court basketball on the Garden floor while everyone in the crowd cracked the same joke about them being better than the Pistons (/Knicks if it were a different week). J.R. either intended to get shots up well before halftime ended or knew some babies were playing ball and wanted to participate. Either way, he emerged from the locker room early and sort of forced himself into the game, as can be seen in this replay:

First of all, yes, that's a choice zinger by Mike Breen, and doubly funny because Clyde always makes that same joke about Breen himself. Most of all, though: J.R. GOT SHUNNED BY KIDS! It was borderline heartbreaking! He jumped in front of the inbound pass and tried to play defense for the white team and one of his own newly adopted teammates pushed him off the damn court! How's the white team gonna turn down that length? Then, while possession changed willy-nilly, J.R. demanded the ball at halfcourt but got frozen out by both teams even though he was double the height of anyone out there and a slightly more reliable ball-handler to boot. Kids are ruthless.

Thanks to Oakley and Allen for both videos and The Knicks Wall for the .gif.