祝大家蛇年快乐! Happy Snake Year, everyone! It's Spring Festival time here in China, which means for us here in the North we must pretend like Spring has already arrived. Don't bullshit me, China...it snowed three freakin' times this week! We Americans know when Spring will really arrive...we have a magical groundhog that tells us!

Today is the biggest day of the Chinese year. We have a table full of meat, fish and Chinese baijiu liquor, and when the clock hits midnight we'll chow down on some dumplings. Until then, my wife's family will thrill to the four-hour Spring Festival TV Spectacular -- basically the Chinese Super Bowl -- hosted by the man from the headline photo, Li Yong. This guy is basically the lovechild of Dracula and Wayne Newton, and he emerges from his lair but once a year, to host this show. Here he is rocking a pimped-out usher jacket and some goats. 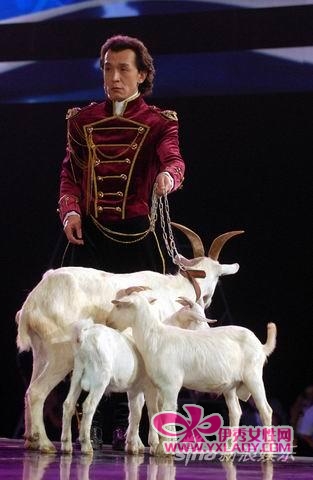 This is the kind of in-depth reporting you've come to expect from Posting and Toasting -- come for the basketball, stay for the goats.

Anyway, the Chinese just invited special guest performer Celine Dion to come on stage and sing. My wife's family is yelling at me to come in and watch...I must love her, they figure, because we're both white. In the meantime, I invite you to enjoy these previews of the basketball sort:

The Questionable Health of Chris Paul: Big Deal, or the Biggest Deal?

Paul returned to the lineup on Friday night against Miami...and the Clips suffered a particularly unsightly 111-89 ass-whupping. He played poorly -- 3 points, 2 assists and 3 turnovers in just under 20 minutes -- but who cares? Chris Paul will play against the Knicks. Crap.

In last week's Pistons preview, I mentioned my pet theory that the Knicks might play better against guards who relied more on smarts than speed. Jose Calderon then proceeded to poop all over my pet theory with a 15-point, 7-for-12 performance...in the first game with his new team, no less. Can I be real, here, people? Will you let me be real for a second? Chris Paul is better than Jose Calderon.

The Knicks have demonstrated time and again that they can't stop any point guard, and they haven't faced a point guard of Chris Paul's caliber...because point guards of Chris Paul's caliber do not exist (sorry, Nets fans). His knee might still be bothering him, but he could probably hop around on one leg and carve up the Knicks defense like a hot chopstick through a succulent Chinese meatball. Like lead paint it's delicious, but deadly.

So do the Knicks have a chance in this game? The Clippers don't have many weaknesses, and their weaknesses don't particularly suit the Knick's style of play. They struggle giving up offensive rebounds (20th in DRB%) and fouling (27th in free throws allowed per field goal attempt). The Clippers are so desperate for interior defense that we've been hearing Kevin Garnett-to-the-Clippers rumors for the past two weeks...rumors which Douchey McMovingscreen has personally shot down in the press. And let me be the first to say, thank God for that. The Clips are one of the few title contenders I don't hate. Keep Garnett away from the Clips. Keep Pierce away from everyone. There's no need to expose unsuspecting teams to such virulent strains of Celtic-ism.

A few weeks ago, the Knicks probably wouldn't have had much luck exploiting the Clips' weakness inside, but with the return of Amar'e Stoudemire, the Knicks have a chance. STAT needs to be unleashed upon this game, and the Amar'e-Tyson-Melo front-court should see serious minutes. I'm interested in this match-up as a kind of offensive experiment for the Knicks. Many fans have been complaining about the lack of adjustments from the Knicks' coaching staff, and this is the kind of game where the Knicks might need to step out of their comfort zone to win. Here's hoping that they bring 48 minutes of defensive intensity and don't stubbornly keep to the same offensive strategy if the threes aren't falling. If they don't, then they won't have much of a chance in this game.

In case you're wondering, the Chinese word for dinosaur is 恐龙 - or "scary dragon". Oh China, is there anything you CAN'T relate to dragons?

The Knicks have more games remaining against the Raptors (four) than they do against the rest of the Atlantic Division combined (three). That's weird...and it has the potential to be awesome, since the Raptors suck.

Still, I'm concerned. The Raptors are the most annoying kind of NBA organization -- the kind that make stupid roster decisions that still come back to bite the Knicks in the ass come game-day. Extend DeMar DeRozan? Bad idea...unless he's playing the Knicks (19.2 PPG - highest scoring average for any opponent). Trade for Rudy Gay to pair with DeRozan? Not smart...unless he's playing the Knicks (20.5 PPG - 4th highest scoring average for any opponent).

And don't me started on Andrea Bargnani. Going by Win Shares / 48 minutes, the guy has been the third-worst player in the league to start more than 20 games. Only Austin Rivers and Michael Beasley rank lower -- one of those guys is a rookie, and the other is a Michael Beasley. That is some pathetic company, especially for a guy in his seventh NBA season. But Bargnani seems to create - and exploit - mismatches every time he plays the Knicks. A few years ago, he created these mismatches against every team, as a stretch four who could hit over 37% of his three. Now he's down to 30% (.309), he won't play inside or defend, and he's pretty much useless. He's not the kind of guy I want on my team (DO YOU HEAR ME, KNICKS' FRONT OFFICE!?), but I'll be holding my breath every time he launches from deep.

Speaking of disappointing, overpaid Raptors, this will mark the Garden return of Landry Fields...unless he's still dealing with the back spasms which kept him out of the past few games. Landry is having the kind of season that would almost make you feel sorry for him...until you remember that he's sleeping next to at least one model every night, on a bed made of money, with enough money left over to construct a money sofa for Jeremy Lin to crash on whenever he's in town. To the Per-36-Minute-mo-tron!

Check out the nearly-linear drop in his shooting percentages. To the man's credit, he's accepted his weakness from behind the arc and has basically stopped shooting threes altogether (1-for-9 so far this season...you'll never play for D'Antoni again with that attitude!).

Now, I feel like it's a given that he's going to double his three-point total against the Knicks. It feels inevitable, doesn't it? Let's put it to a poll, shall we? How many threes do you think Landry will hit against the Knicks? Let your voice be heard, and as always, go Knicks!!!