"Ask not for whom the bell tolls; it tolls for {kn}ee"

Share All sharing options for: Requiem for Melo's Knee

Five years ago, when I was still living in the frozen wasteland of Northeast China, I dated a girl from India who was studying Chinese in a local university and working as a nanny for her wealthier cousin. One day she got a call that her father was sick and she should go home for a few weeks to visit him. We said our goodbyes and promised to meet up when she returned to finish her studies. After she left, I found out from her cousin that the family had made a secret agreement never to let her return to China. She never got a chance to finish school, and I never saw her again. That was my most painful memory even tangentially related to India...

...until the Knicks played "Bollywood night" in Oakland.

My word, that game was offensive - to the eyes, the ears, the heart and the colon. Yet the all-around crappy effort from everyone involved is by far the least of fans' worries at this point. Chief among our worries is the health of Carmelo Anthony. The dude looked bad last night - like "my mom playing basketball with sciatica" bad. What a roller coaster of emotions - I went to sleep thinking Melo wouldn't play, I woke up to find this "Melo will play" article by prominent Knicks blogger Steph Rosenblatt (spell check on the name, Mr. Editor?), and I ended the game furious at Melo for playing and the Knicks for even considering letting him play. I think it's safe to say we haven't seen the end of the Tragedy of Melo's Knee...hell, we're not even at intermission yet.

Do we have any real facts about the state of Melo's knee? To quote my legal hero, Lionel Hutz: "We have lots of hearsay and conjecture...those are kinds of evidence." Reporters and professional sports talkers are hitting the airwaves with reports of "Melo's knee is worse than the Knicks are letting on", and we believe them, because, well, Knicks.

The only thing we know is the date of Melo's injury - according to the man himself, it happened on Dec. 25. Hmm...that date sounds familiar. Hold on, let me ask the 19th century, Dickensian orphan selling papers just outside my window.

Orphan (in a cockney accent): "That day? Why, sir, t'was the day that asshole Dwight Howard took Melo out of the game with a hard foul!"

Me: "Truly? Boy, here's 60 shillings, 18 pence and a farthing. Go to the butchers, buy that plump Christmas goose in the window and chuck it at Dwight Howard's stupid, tiny head!"

But if you go game-by-game, the picture becomes more complicated. Melo's game didn't fall off a cliff; it just started fluctuating wildly from game-to-game. Here are Melo's ten best games of the season, by Game Score:

As you can see, 7 of his 10 best games came after the injury - including three last month, and one as recently as two weeks ago, against the Warriors.

That sounds encouraging...until you look at the flip side of the coin: Melo's 10 worst games of the season.

Post-injury Melo giveth, and he taketh away - 7 of his 10 worst games have come since the injury, including his five worst games of the season. And quality of opponent does not seem to factor much into his play - he's struggled against Boston and Indiana, but also against Sacramento and Toronto. It's not that Melo has been terrible since the injury; he has just been inconsistent.

The question now becomes: did whatever happened to Melo in Cleveland exacerbate Melo's injury to the point where we won't even see occasionally-great Melo again for the rest of the season? The early returns from last night do not look promising. Melo didn't look remotely like he should be on the court. Yet there he was - playing in the third quarter of a game the Knicks were losing by twenty points.

Let's end today with a therapeutic session of blame-laying and scapegoating. Get your pitchforks and torches ready, people!

The New York Knicks, people! In 2010-2011, a Knicks coach was confronted with the problem of a superstar player who injured and/or at serious risk of injury, and he chose to run said player into the ground, playing him an conscionable number of minutes. Fast-forward two seasons - different coach, different superstar, same scenario, same results. I've been one of Mike Woodson's biggest defenders, but playing Melo nearly four more minutes a game while he was nursing an injury...for two months...in the middle of the season...there's just no excuse for that.

Then again, Woodson did his best to manage Amar'e Stoudemire's minutes, resisting calls from the fans and media to play him more, and Amar'e's knees still went Chernobyl. Perhaps the human knee itself is the Knicks' greatest enemy - more dangerous than Boston or Chicago or Miami. Knicks and knees just don't get along, and until mankind learns to play basketball without using the knees, the Knicks will never win that elusive championship.

Damn you! God damn you all to hell!!! 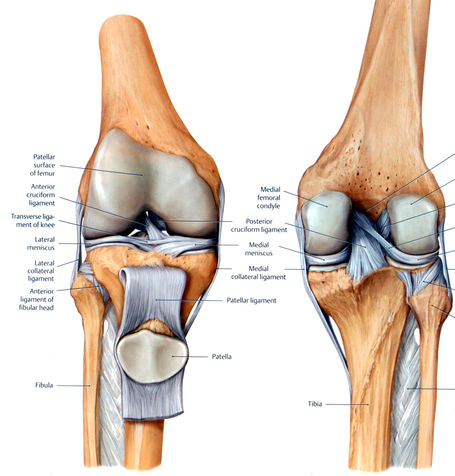