We all know hell hath no fury like a woman scorned, but what about a small forward...with a knee injury...who actually did the scorning himself?

So, how bout them Knicks? They're still...playing basketball games. It's hard to know what to expect going forward from a team that wins a game by 29 points, then turns around and loses a game by 29 points. Maybe they'll play to a tie next time out? I'm just kidding...Americans don't do ties. We play to win all the time, and that's why we kicked everybody's ass in WWI and WWII! U-S-A! U-S-A! (Sorry, but I just realized I'm moving home in eight weeks, so I need to get back into the mindset.)

Let's face it: this has pretty much been the year of ex-Knick revenge. Let's break down the list of active ex-Knicks who played at least 82 games in New York, along with the Knicks record in those games. Warning: keep your trusty vomit bucket handy:

Yep...that's a 4-12 record. Don't look now, but five of the Knicks' next seven games are against members of the Ex-Knick Club, including four on the road. The boys in blue and orange better find a way to reverse this trend, before opponents start catching on and start passing Renaldo Balkman around on 10-day contracts. I hear he's available! (too soon?)

We'll start in Denver, where the Knicks will face a pair of former Knicks. Wilson Chandler didn't play in the last game, and they were able to repel Gallo's ex-Knickiness. But two ex-Knicks in the same game? That's like crossing the streams, dude (Four! Five if you count Corey Brewer! - Seth). The Knicks might win, or the universe might explode...really no middle ground here.

...then I checked the schedule.

I suppose it could just be a coincidence. I guess if he goes directly from this game to the hospital to get his knee drained, we'll know for sure. Melo is listed as probable. He's playing - you know it, I know it, George Karl and his chipmunk cheeks know it. Melo didn't play particularly great last time out against the Nugs - he scored 34 points, but shot 10-for-24, missed five free throws, and the Knicks turned the game around at the start of the fourth quarter with him on the bench.

Count me among the worried - the combination of Melo's knee injury and lust for showing up Karl scares the hell out of me. The Knicks won the first game...at the Garden...in early December, when the Knicks were awesome and the Nuggets were below .500. Since then, the tables have turned somewhat - Melo is hurt, and the Nuggets have won nine in a row.

This is a game that will need to be managed properly from the bench. Recently I have been somewhat critical of the way Mike Woodson has been handing out minutes, but I believe in being proactive. Mike, I'm here to help you, buddy. Let me start off by showing you this actual topographical map of the continental US: 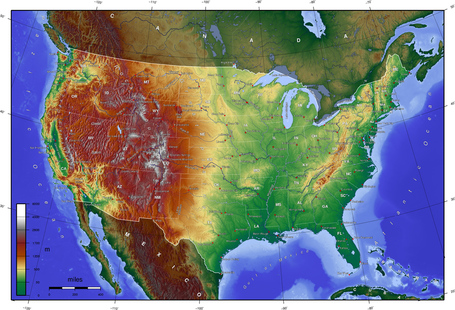 Denver, CO, is known as the "Mile High City" (we sure as hell don't call it the 1.609344 KM High City, because the metric system is for pansies! U-S-A! U-S-A!) The city is located near one of the white areas of the map - that means the game will be played at altitude. Altitude affects athletic performance. Also, you might want to consider the following factors:

I won't tell you what to do with this information, Mike, but you really might want to give it some thought. And yes, I'm still a little bitter over the whole torture thing.