Good day, friends. Today and tomorrow are days off for the Knicks, which is good. They need some days off. While the Knicks lick their wounds in Los Angeles, we link our links in Link Linkelinks:

- Turkey vultures. I learned in sixth grade science that you can identify them in flight by the "V" shape on the underside of their wings. They used to sit on my neighbor's roof and menace my dogs. They also, as I read yesterday, are pooping and vomiting all over a small town in North Carolina.

- Injury semi-updates: Kenyon Martin is fine and I'm sure I'll be passing along an announcement that he's been signed for the rest of the year very soon. Tyson Chandler and Carmelo Anthony are both "questionable" for Sunday afternoon against the Clippers. Either way, Melo's headed to L.A. after getting that knee drained.

- And yeah, it's pretty funny that James White went from starting to not playing a single minute in a two-game span.

- Two cool tools (anyone wanna join me in making a podcast called "Two Cool Tools"?): 1. Keep track of the Knicks' odds of occupying different playoff seeds and facing different playoff opponents (via Ed Kupfer). 2. Look back at a boxscore at any point in the game (via Kevin Draper). That second one is HUGE.

- This Adidas commercial featuring Iman Shumpert (and Damian Lillard, too, that little bastard) aired last night during the game. Here's a clip with just Shump.

- Confirmed: None of the Knicks hold medical degrees. 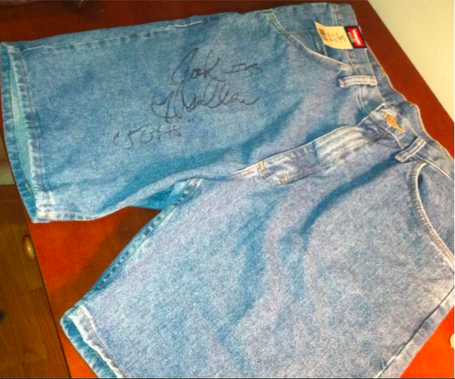 That comes from a P&T reader. They are real and I am jealous.

That is all for now. Enjoy your Knicks-free day.