Share All sharing options for: Knicks 100, Celtics 85: "This feels exactly the way I want it to feel."

That went great! Like murderhill and a whole bunch of you said, tonight felt very good. It was a weird, ugly game between some weird, kinda JV-looking lineups, but forget all that. The Knicks beat the Celtics in Boston for the second time this season. They did so by building a small early lead into a big halftime lead, then calmly snuffing the predictable Boston run in the third quarter.

The formula for the above was familiar from previous games in which the Knicks didn't shoot well or benefit from a great Carmelo Anthony performance (he shot just 10-30): They vastly out-attempted the Celtics. The guards jumped passing lanes relentlessly and the bigger people rotated well to help force 19 Boston turnovers to New York's eight. Said bigger people also made an impact on the offensive glass, where the Knicks got themselves 15 extra chances to the Celtics' seven. I say "bigger people" of course, because Kenyon Martin-- the only real "big", and even that's a stretch-- played just 25 minutes. The other 23 minutes' worth of lineups were a mess of guards, tallish shooters, and Melo that held up with remarkable aplomb against a small-but-not-quite-as-small mix of Celtics.

So, the Knicks moved the ball worse and shot worse than the Celtics did, but thrived-- as they sometimes do-- on volume. Speaking of volume, the Knicks had to hit SOME of those surplus attempts to dominate like they did, and that duty fell to J.R. Smith. I don't know if this was J.R.'s very best game as a Knick, but it was up there. It's been a delight to watch him grind his way to the basket instead of chucking jumpers in recent games, and he stuck right with that against Boston's gooey interior defense. Take a look at this beauty (via ESPN): 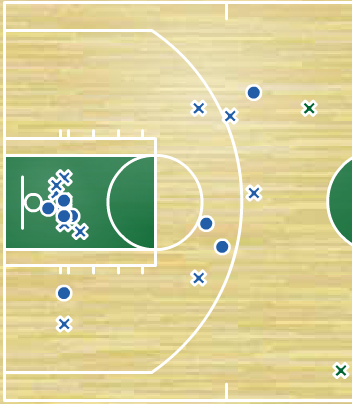 The paint's so OXy! J.R. only attempted three three-pointers (I'm pretty sure ^^^that^^^ little guy on the bottom right is green. I should have cut it off but it's way too late now), hitting one to end the third quarter in the grandest, most back-breaking way possible:

That one put the Knicks back up 15. Otherwise, everything came within the arc, and mostly inside the paint. When there wasn't any space and the Knicks needed a step-back, J.R. gave 'em a step-back (and/or The Pipe). Everything else was a curling, probing approach to the rim with an impressive finish, including tireless pursuit of his own tip-ins. Wonderful game, J.R. Extra snacks for you at snack time.

Just a few quick notes because I'm trying to watch these soccers:

- Melo's shot looked wrong for some reason-- too many arms, too few legs, I reckon-- but he had a pretty positive outing for 10-30. He got into the paint for buckets, offensive rebounds, and free throws just like J.R. did and made a few nice passes out of the post; occasionally sealing his man, accepting the lob, then tossing a quick extra pass around the help defender. Melo's defense was pretty useful, too. He helped keep Jeff Green's scoring line (19 on 6-14) within reason and managed to hold his ground and lend a hand in some forced turnovers as the de facto center for a decent chunk of minutes.

- The Knicks are now 5-0 with Pablo Prigioni in the starting lineup, which is both coincidental and not. He's been pretty terrific and he stayed pretty terrific in a season-high-tying 30 minutes. His offense was typically scant but efficient-- a three and a couple finishes off turnovers plus some gorgeous feeds out of the pick-and-roll. His defense was amazing. The Knicks switched a bunch and it got them in trouble a bunch, but on a remarkable number of possessions, Pablo switched onto a larger, faster human and managed to force a bad shot or a turnover. (My favorite play of Pablo's was his juuuuust reachable pick-and-roll lob to Melo in the second quarter. Also both his steals. )

- Iman Shumpert played decent enough defense on Paul Pierce and hawked passing lanes aggressively all around the floor. On offense, Shump wasted a few transition opportunities with his skittish dribbling, but made up for it with a nice stretch of extra-passing and jumper-hitting (well, he hit the one) in the third quarter.

- In a splendid turn of events, Mike Woodson kept the two-point-guard look in pretty heavy rotation. Raymond Felton's 32 minutes were very quiet, but...well, not harmful. The only thing I remember well is his wiiiiide right jumper off the nether regions of the backboard, but my notes say Ray got a few nice drives to drop and threw some crisp kick-out and entry passes. He, like the rest of the folks, defended well off the ball and pounced on every opportunity to push the pace off turnovers.

- Jason Kidd followed a similarly quiet first half with a brilliant third quarter. His man defense-- even after getting beat-- was excellent. He funneled guys toward help and often got a last-second hand in the way of their attempts. Kidd also snatched some difficult rebounds and did that thing where he reads a passing lane with such preemptive certainty that it looks like the pass was intended for him on at least one occasion.

- Kenyon Martin got himself a whole slew o'put-backs. His other offensive endeavors didn't go quite as well. His help defense wasn't the best we've seen, but he walled off some drives and gave some great fouls, managing once again to TRY to maim people without actually maiming them. Pretty amazing. It's gonna happen eventually, but eleven games in, still no casualties.

-Steve Novak hit three of six threes. Mike Fratello pointed out how he got his looks by backpedaling ever so stealthily away from a central pick-and-roll action to create some space to shoot while his man stayed in the middle to stop the roll man. Those sorts of looks dropped. The ones where he pretty much slapped a pass out of the air to redirect it toward the basket didn't.

- Chris Copeland played very poorly in 13 minutes. Cope playing ample minutes at "center" probably wasn't going to end happily, and...well, it didn't. The Knicks survived those minutes, but not because of any contributions he made.

- 'Twas so great to see Tina Cervasio on TNT. I hope one of these big networks doesn't scoop her up for good, but she deserves it.

- Two characteristics of the Knicks' first-half-ending, ultimately game-sealing 19-4 run to end the first half: 1. Kenyon Martin wasn't on the floor for any part of it. Small-ball the whole time. 2. The Celtics missed so many point-blank looks in transition. After killing the Knicks in a few fast breaks, they just blew lay-ups. It helped a lot.

Good times. The Knicks have won five straight and, at least for the night, they sit in second place in the Eastern Conference. Memphis tomorrow.