No Tyson, no Kenyon...no problem?

Hello, fans of the Atlantic Division champions! While I'm sure none of you ever miss an issue of 篮球先锋报, just the same I'd like to pass along the cover of the latest issue: 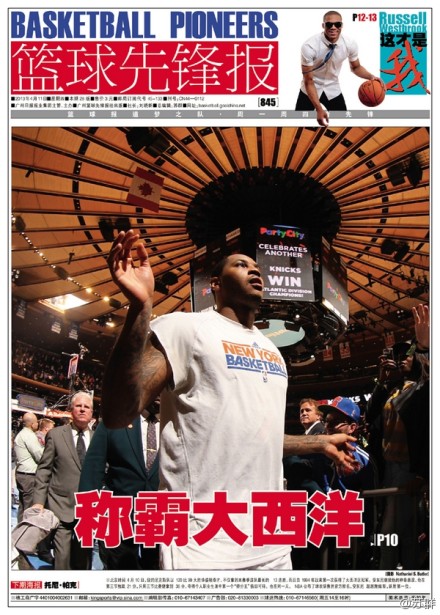 The man in the photo is known to the Chinese as "Little Sweet Melon" - 小甜瓜 - and the headline translates to "Dominate the Atlantic" - or, if you want to get overly literal, "Seek Hegemony over the Great Western Ocean."

Sweet Melon and the ocean-conquering Knicks don't have much time to rest on their laurels; they're heading to the Windy City to take on the injured-but-still-terrifying Chicago Bulls. I've made it a point to try and sound macho when someone mentions the prospect of facing the Celtics in the playoffs, but any combination of the words "Bulls" and "first round" in the same sentence is enough to send me curling into the fetal position.

No team owned the Knicks this season quite like Chicago - with their stifling D the Bulls have Thibodeau'd and Rochambeau'd the Knicks in three straight non-competitive games. New York is an astonishing 4-0 this season playing in Miami, Oklahoma City and San Antonio, but put them on the same floor as the Bulls and they usually last just long enough to evacuate their collective bowels all over the court before getting themselves ejected.

And please, don't give me the whole "the Bulls are too banged up to be a threat in the playoffs." Just don't. I've seen enough Knicks playoff series to have learned these three immutable facts:

That means Joakim Noah and Luol Deng will be healthy. It means Derrick Rose will definitely play. It even means Juan Ponce de Leon will emerge from the Florida Everglades, 500 years after having found the legendary Fountain of Youth, and present a flask of youth serum to Michael Jordan and Scottie Pippen just in time for Game 1. Yes, all of those things will definitely happen.

I'd like the Knicks to win this game, if only for my sanity (also, I doubt the Bulls will drop to 7th in the standings. But there is a problem - thanks to the injuries to Tyson Chandler and Kenyon Martin, the Knicks are heading to Chicago with precisely zero bigs.

Facing the Bulls without any semblance of size sounds like a pretty hopeless effort, which is why I've heard rumors from Knicks blogger Sepp Roosevelt (What kind of name is that? Dutch?) that the Knicks might be acquiring James Singleton to fill the "undersized big" role in which K-Mart had performed so ably these past few weeks. That's all well and good, but let me pose you this question: why do the Knicks even need a center for this game? They can't possibly play any worse than they have the last three times they played the Bulls with a center. Check the +/- for the various Knick bigs:

Yeah, the Bulls have pretty much owned us this year. That said, the Knicks may have been presented with a fun opportunity here. Go wild, Mike Woodson. Wipe your butt with basketball convention. The traditional center is like total squaresville, daddy-o! You didn't beat the Bulls with them, and you're just as likely to not beat the Bulls without them. Hell, you might even win!

With that in mind, here are some of the best candidates to replace Chandler and K-Mart as "center":

Woodson already experimented with the "Copeland at the 5" lineup in the second quarter of the Thunder game. His defense looked downright decent in that stretch, and the Knicks went on a ten-point run during that time. After the game he credited Woodson with staying in his ear all season about his poor play on that end. I admit to souring on Woodson a bit during the whole Melo Kneegate, but stories like that show he might just be a better coach than me. If it's true that Cope has turned the corner defensively - and we can dream, can't we? - then Woodson might as well unleash him like the Predator he resembles.

Raymong Felton pulled down two offensive rebounds in one possession on Sunday. Steve Novak doesn't have two o-boards in a game this season...and let me remind you, he's damn-near seven feet tall (6'10) and plays almost twenty minutes per game.

You may be thinking, "This will never work on defense. Any big worth his salt will just take Prigs down to the low block and crush him." That might be true...if said big ever gets the ball . First, somebody has to pass him the ball, and our man Pablo eats post entry passes for lunch! Pablo might get himself 20 steals in this game!

These ideas all have their merit (except for the Novak thing), but I'm still worried we're not thinking far enough outside of the box. I recently came across Shane Battier's startling prediction that a female will play in the NBA in our lifetimes. I guess we're all supposed to listen to him cuz he's super-smart and went to Duke and pronounces his name "Batt-ee-ay" (Ooh-la-dee-da, Mr. Frenchie), but what the hell? So allow me to submit for your consideration.

Mark Cuban wants to give her a tryout - and he decided against resigning Tyson Chandler - ergo, ipso facto, Griner is better than Chandler (because Mark Cuban can't just be an idiot, can he?). She's 6'8, her college stats are pretty bad-ass, and she already passes the "Can you rebound better than Novak?" test. Not to mention her vague resemblance to Chris Copeland, which would make the perfect "Jah Rastafari Frontline". These bomba clot Bulls won't know what hit them. I and I is intrigued.

For what it's worth, ESPN's Kate Fagan doesn't believe Griner is physically capable of playing in the NBA, but since when did we start listening to women about whether or not women are physically capable of playing ball? Next you know, they'll be wanting to vote, am I right fellas? [downs a glass of scotch next to cardboard cutouts of Don Draper and Roger Sterling] If Griner wants to give it a shot, then I say sign her up!

So who should the Knicks start at the 5? I leave that choice to you. Check the poll at the bottom, and go Knicks!