The Knicks dominated another second half to take a 2-0 series lead on the Celtics.

Share All sharing options for: Knicks 87, Celtics 71: "Is this the same game?"

"Tale of two halves" is a phrase you hear now and then, and it described Game 1 between the Knicks and Celtics pretty accurately. Game 2 was something else, something far weirder. Rather, it was two somethings else. Like rickman hermannator in the game thread, a lot of us spent the second half wondering if we were even watching the same basketball game. It was as if the Knicks didn't open their playbook until halftime, or perhaps swigged the antidote to whatever poison they'd drunk at tip-off. Whatever the case, a surprisingly narrow halftime deficit flipped promptly into a third-quarter edge, then into a double-digit lead, then into an outright blowout that ended with all sorts of delirious chucking and Quentin Richardsons running around. New York ended up winning 87-71, somehow limiting Boston to even fewer second-half points (23 this time) than they did in that record-setting Game 1. Let us recap.

The first quarter included too many fouls to develop much of a rhythm. After the teams took turns exploiting the refs' stingy whistles for a few minutes, J.R. Smith built the Knicks their first lead with fingertips still tinged gold from his Sixth Man trophy. His 4-4 shooting-- three step-backs and a buzzer-beating pull-up 35-footer-- keyed an 11-0 run that put the Knicks up six after one quarter.

I called the manageable halftime deficit surprising earlier because the second quarter was nightmarish. Straight farts from start to finish. It began with an unseemly Knicks lineup-- Chris Copeland and Steve Novak sharing the floor with just one point guard (Jason Kidd)-- facing a Boston group anchored by Kevin Garnett (returned from early foul trouble) and stocked with Boston's best shooters. That got yucky. The Celtics processed a steady feed of Knick turnovers and isolation bricks into fast breaks and Jason Terry threes. Even once the starters returned, the Knicks kept their eyes and feet planted on the floor. They just loafed around refusing to set screens for one another or cut or make extra passes, then remained aloaf while the Celtics leaked out for easy buckets. Carmelo Anthony, ever the bellwether, got his touches with neither movement nor traction. He just caught, faced up, then barreled into the set help defense while his teammates stood waiting. New York entered the break down just six only because they'd hit free throws; the crucial three-point and turnover struggles lay in Boston's unlikely favor at half.

"Hey guys, remember all those screens and double screens and triple screens and hand-off plays and sets with Melo as the screener and off-ball curls and side pick-and-rolls we practiced then employed with tremendous success all season long? You know how I told you to avoid those in this game because they made things too easy for us? I changed my mind. I know I did that last game, too. Shut up. Let's actually play basketball. Oh, and get back in transition and rotate to help each other and stuff. Meow."

Right? Like, what else could it have been? There was undoubtedly some element in each win of the Celtics slowing over time (and, in this one, falling into foul trouble). It's simplistic to suggest the Knicks just weren't running sets early on-- the Celtics did a great job stamping out pick-and-rolls and stuff early in both games-- but shit, did it not look exactly like the Knicks abruptly decided to play in the second half? Again, and even more so? All at once, Raymond Felton, Tyson Chandler, and Melo began to stir the Boston defense with pick-and-rolls. Felton slalomed switching bigs to find the rim and Melo got free as both a handler over screens and a screener himself. The Knicks actually created shots, instead of just attempting the ones that presented themselves. With the Boston defense unsettled, Iman Shumpert single-mouthedly devoured the deficit with a couple quick threes, then Melo began to cook soup. On the other end, Chandler finally began to assert himself. He thwarted some Kevin Garnett attempts, helped on penetration, and boxed out well for a couple minutes. He then passed that torch to Kenyon Martin, who swallowed the torch whole and spent the fourth quarter manically spanking layups and bellowing at no one in particular.

Save for a brief stretch in which Paul Pierce and Jordan Crawford narrowed the gap to single-digits by attacking Steve Novak, the second half was a joke. Again, Boston's 25-point second half in Game 1 was their all-time playoff low. Tonight they had 23. In the two first halves to date, the Knicks have allowed a poor offensive team to play efficient, explosive offense. In the two second halves, they've limited the Celtics to consecutive seventy-year lows. That is absurd, and it wasn't even done with forced turnovers this time. The Celtics committed just five second-half turnovers, but shot, by my count, 7-36 after the break. That's 19.4 percent. If you map that out, it looks like this: 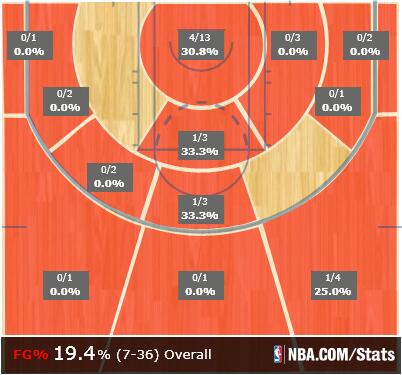 Just a bloodbath. And this is after 56 percent shooting in the first half. Two different games, I tell you.

I'm gonna leave my individual notes for a morning post, along with all the .gifs and videos and whatnot. For now: 2-0. Home-court advantage preserved. I feel mighty.